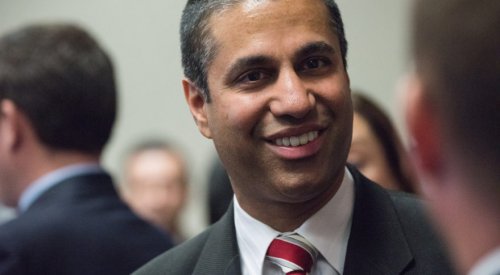 WASHINGTON — Federal Communications Commission Chairman Ajit Pai wants his agency approve SpaceX’s 15-month-old application to serve the U.S. with its proposed megaconstellation.
In a statement released just days before SpaceX launches its first two prototype satellites, Pai urged support of the company’s application within the FCC, saying Hawthorne, California-based SpaceX can help reach rural and isolated parts of the country with high-speed Internet.
“To bridge America’s digital divide, we’ll have to use innovative technologies. SpaceX’s application — along with those of other satellite companies seeking licenses or access to the U.S. market for non-geostationary satellite orbit systems — involves one such innovation,” Pai said.
SpaceX’s demo satellites launch Feb. 17 on a Falcon 9 rocket along with a Spanish radar-imaging satellite called PAZ. The satellite pair, dubbed Microsat-2a and Microsat-2b, will deploy at the same 511-kilometer altitude of Hisdesat’s PAZ, then rise to a 1,125-kilometer orbit to test technology for a constellation of some 4,500 broadband satellites.
SpaceX is one of 11 companies that all followed OneWeb in asking permission to sell telecommunications services in the U.S. with new non-geosynchronous satellite systems in 2016. Since then the FCC has approved three applications: OneWeb for 720 LEO satellites, Telesat Canada for 117 LEO satellites, and Space Norway for two highly elliptical arctic-focused satellites.
“Following careful review of this application by our International Bureau’s excellent satellite engineering experts, I have asked my colleagues to join me in supporting this application and moving to unleash the power of satellite constellations to provide high-speed Internet to rural Americans. If adopted, it would be the first approval given to an American-based company to provide broadband services using a new generation of low-Earth orbit satellite technologies,” Pai said.
That none of the three companies the FCC recently approved are America-based isn’t fully accurate. OneWeb is headquartered in Arlington, Virginia, but was first licensed in the United Kingdom.
SpaceX CEO Elon Musk shared his plans to enter the satellite business by building thousands of small satellites and launching them into low-Earth-orbit to bring true broadband internet service to millions beyond the reach of terrestrial offerings in 2015. Musk’s Jan. 16, 2015 announcement in Seattle, leaked onto YouTube by an attendee, came just two days after OneWeb announced that Virgin Galactic and Qualcomm had agreed to invest in its rival system.
SpaceX is not the first of the megaconstellation hopefuls to stake their claim with a demo satellite. Telesat and fellow Canadian company Kepler Communications both launched satellites in January — Kepler a cubesat on a Chinese Long March 11 and Telesat a larger 168-kilogram smallsat on an Indian Polar Satellite Launch Vehicle.
OneWeb’s first 10 satellites launch in May on an Arianespace Soyuz, and unlike its competitors, will be operational spacecraft, not demos. Though that first launch slipped by two months, OneWeb plans to begin service a year or two ahead of SpaceX and Telesat.
SpaceX Vice President of Satellite Government Affairs Patricia Cooper testified before the Senate Commerce Committee in late October that SpaceX was within a “few months” of launching the demo satellites to validate in-house technology before proceeding with construction and launch of some 4,500 satellites. SpaceX has kept busy since then; it has launched six missions in the past 15 weeks, including last week’s impressive debut of Falcon Heavy and January’s shrouded-in-mystery launch of the classified Zuma payload.
Cooper, when testifying in Congress alongside OneWeb Founder Greg Wyler, said SpaceX plans to start launching operational satellites in 2019, and hopes to have a fledgling service ready by 2020 or 2021 with around 800 satellites in orbit. Wyler said OneWeb will be serving customers in 2019 with its first generation constellation, delivering 500-Mbps internet connections to customers, and that by 2021, OneWeb should have its second-generation constellation already in orbit, providing individual users with 2.5 Gbps of high-speed internet, a five-fold increase over the first generation.
OneWeb’s first constellation will consist of 900-satellites, with Soyuz rockets launching 32 satellites every 21 days throughout 2019. However, assuming an uninterrupted launch campaign, OneWeb will need until at least 2020 to complete the full first generation. Soyuz is OneWeb’s primary launch vehicle; of the company’s other launch providers, Virgin Orbit LauncherOne missions can only carry two or three OneWeb satellites at a time, and Blue Origin’s New Glenn won’t be ready until 2020 at the earliest.
Competitor Telesat, which operates a fleet of 15 geostationary telecommunications satellites today, has yet to select a manufacturer for its 117-satellite LEO internet constellation. After choosing a builder this year, Telesat expects to begin launching small satellites in 2020, and beginning service in 2021.
Cubesat-operator Kepler is less of a competitor to SpaceX, OneWeb and Telesat given its focus on connecting low-data Internet-of-Things devices. The company has a second cubesat prototype launching this year, and has also not picked a manufacturer for its full 140-satellite system. Kepler’s larger operational constellation will also sport intersatellite links to downlink information for other spacecraft, including satellites and space stations.
﻿
UN committee approves space sustainability guidelines
Air Force to acquire new jam-resistant GPS satellites