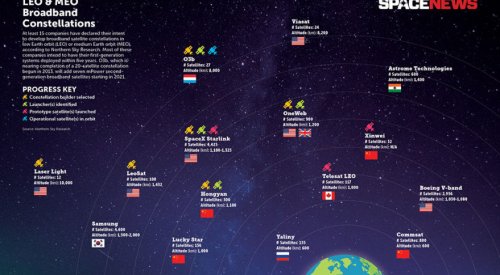 Divining what the stars hold in store for broadband megaconstellations 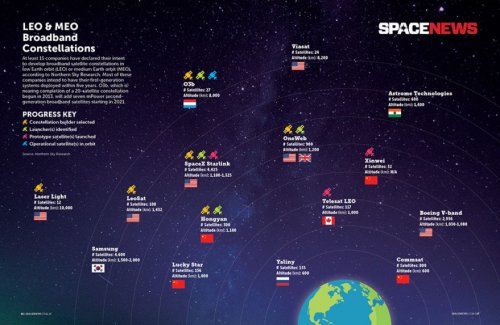 WASHINGTON — The world’s biggest, best established satellite operators talk of broadband as an enormously lucrative opportunity. But in truth, nothing is causing them more frustration.
Demand for ever-faster broadband internet connections is maxing out today’s satellites, setting off an industry-wide stampede toward increasingly powerful high-throughput satellites (HTS).
While that might sound like a good thing, the rush to HTS is driving down bandwidth prices so fast that some fairly low-mileage satellites are struggling to keep up.
Seasoned operators, determined to stay ahead of the curve, are thinking twice before investing $200 million or more in a geostationary broadband satellite designed to operate at least 15 years. Factoring in the two to four years it can take to build and launch a communications satellite, such a long-lived asset risks falling behind before it is in orbit.
Big, slow-moving geostationary satellite projects costing about as much as Paul Allen’s superyacht or a Marvel superhero blockbuster have long dominated the satellite communications business. Fifteen-year satellites continue to do the trick when it comes to the biggest source of revenue for operators — transmitting television broadcast signals.
But broadband is a faster animal.
The dominance of big geostationary satellites is about to be tested by the emerging megaconstellations — nimble fleets of hundreds or even thousands of relatively small satellites orbiting the planet at significantly lower altitudes.
Cheaper to build, less costly to lose one or two, the low- and medium-Earth-orbit broadband satellites being built by OneWeb, SpaceX, Telesat and others promise nearly fiber-optic speeds and global coverage without the small-but-annoying lag that radio signals suffer during their 72,000-kilometer round trip to geostationary orbit and back. Though measured in milliseconds, latency is the bane of automated stock trades, hardcore gaming and Skype video chats.
Megaconstellations are not without their own sets of challenges, including uncertainty about how the fast-moving broadband market will evolve and questions about how cheaply satellite receivers can be put into the hands of the world’s least served and close the digital divide (a popular raison d’être for many of these projects).
Planned for non-geostationary orbits, the megaconstellation satellites will orbit closer to Earth for faster connections. Those close orbits mean greater numbers are needed to cover the same surface area, driving the need for mass manufacturing and lots of launches. New types of constellations also means new regulatory approvals from nations where companies want to do business.
But these hurdles aren’t stopping companies new and old from taking a swing at LEO and MEO broadband.
According to Northern Sky Research, at least 10 companies are planning to build broadband constellations of 100 satellites or more in non-geostationary-orbits. Most of these ventures anticipate having their first-generation constellations in orbit in the next five years.
Analysts agree that the advent of huge fleets of small satellites in non-geostationary orbits have the potential to change the paradigm for satellite internet. But no one knows exactly how since the megaconstellations aren’t in orbit yet.
Some satellite operators are hedging their bets by taking stakes in the new constellations; others are buying large communications satellites equipped with features to make them more flexible and maximize throughput.
And some are doing both.
What’s an operator to do? 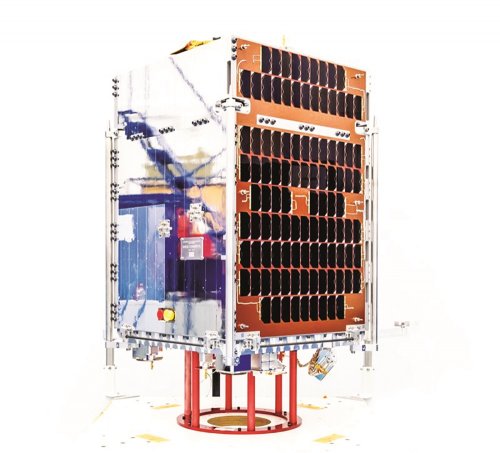 Chris Quilty of Quilty Analytics says the usual metrics for predicting how fast a satellite will pay back the upfront investment “are out the window nowadays.”
Armand Musey, president of the Summit Ridge Group telecom consultancy, agreed.
“The change is so rapid that five-, seven- or 10-year satellites for broadband are essentially all you’d want,” Musey said “You don’t want a 15- or 20-year broadband satellite any more than you want a 20-year-old laptop.”
Avanti Communications provides a recent telling example. In December, the struggling British fleet operator said two of its still-young satellites — one launched within the past five years, the other within the past seven — can barely compete with only slightly younger systems.
WildBlue is another case in point. Boasting roughly 400,000 subscribers and $200 million in revenue when Viasat bought the company for $570 million in 2004, those numbers had shrunk to 100,000 subscribers and maybe $80 million in revenue by 2014, according to Quilty. WildBlue was a “strategically important acquisition,” given ViaSat’s desire to be in the consumer broadband space, Quilty said, “but hard to see how they could have possibly generated a fair rate of return for the satellite.”
Some satellite operators are doubling down on geostationary broadband architectures.
Eutelsat is investing in a new satellite called Quantum that features beams that can change shape, size and power to better deliver capacity where and when it’s needed — a level of adaptability long sought in the satellite industry (Eutelsat ordered its first LEO smallsat last week, but the Tyvak-supplied nanosatellite is aimed at narrowband, Internet of Things applications, not broadband).
Global-IP, a recent startup led by a former Hughes Network Systems executive and advised by former AsiaSat CEO William Wade, ordered a 150-gigabits-per-second satellite from Boeing that’s launching in 2019 on a SpaceX Falcon 9 to connect users in Africa.
And dueling U.S. satellite broadband providers Hughes and ViaSat both have massive geostationary satellites launching in the early 2020s. — EchoStar 24/Jupiter-3 will deliver half a terabit per second of network capacity. ViaSat-3 expects to deliver at least twice that.
Other large operators, including Intelsat, SES and Telesat, are investing in constellations of non-geostationary-orbit satellite systems built for broadband connectivity.
The broadband bandwagon 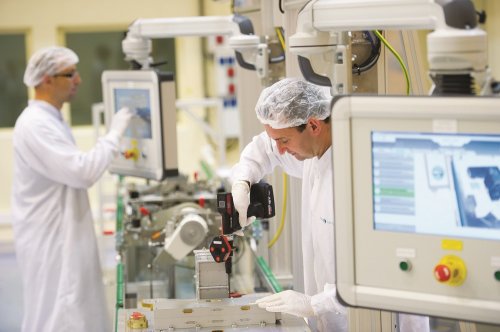 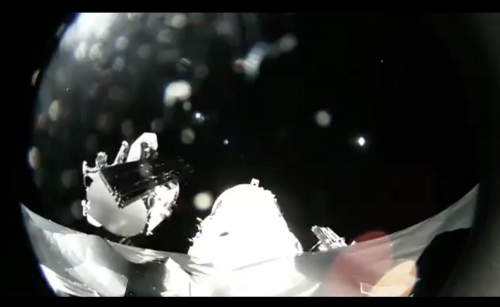 “With the enormous amount of capacity coming online, the only plausible way that it can be absorbed is that there is a large consumer adoption,” said Musey. “The only way you can have a large consumer adoption is if you have reasonably priced ground equipment. That’s particularly true in developing countries, but it’s also true in the U.S. and most advanced countries. Consumers are not going to pay $50,000 or $100,000 or more for a tracking antenna. To hit a consumer price point you need to have flat panel antennas at very low price points.”
In 2015, when Elon Musk first unveiled SpaceX’s broadband constellation plan, he said the flat-panel antennas customers will need to link up with the system would be inexpensive enough — $100 to $300 —to be affordable the world over. Last month, SpaceX acknowledged to The Wall Street Journal that it doesn’t yet know how much the terminals will cost.
OneWeb has said it is working with chipmaker Qualcomm, a OneWeb investor, on low-cost antennas.
Telesat, in an interview with SpaceNews last October, revealed only that the success of the Telesat LEO constellation “is not dependent on a big leap in ground terminal performance and capabilities.”
Consumer confidence
Farrar is among analysts who doubt consumer broadband will be the biggest application for LEO constellations. Bridging the digital divide is a laudable goal, but backhaul — using satellites to help cellular networks to increase coverage and improve service — is an early market they can dominate with or without cheap antennas.
“If you are backhauling from a cell tower, then if a terminal costs a few thousand dollars, that’s not a fundamental barrier to deploying it because you may be spending $1,000 a month on capacity,” Farar said. “If you are providing home broadband to someone for $70 a month, then a terminal that costs a few thousand dollars makes it completely untenable.”
Not every operator is counting on consumer broadband for success. Intelsat, which tried unsuccessfully to merge with OneWeb last year, is a reseller of OneWeb capacity for almost every market but consumer broadband — in-flight connectivity, maritime, government networks, driverless cars and more. LeoSat, likewise, is targeting corporations instead of consumers.
Changing tides
Regardless of whether the non-geostationary-orbit (NGSO) constellations succeed, they are already having an impact on the satellite industry.
From 2014 to 2017, geostationary satellite orders were well below average, dropping into the teens before falling last year to just seven orders worldwide as operators hedge their bets on what technology is best.
In addition to the investments Intelsat, SES and Telesat are making in NGSO ventures, Asia’s largest geostationary satellite operator, Sky Perfect JSAT took a stake in LeoSat last year. ViaSat, meanwhile, has filed FCC paperwork for a constellation of up to 24 satellites operating in medium Earth orbit.
“A lot of satellite operators are flummoxed by the correct choice, and they are taking steps to stay engaged in NGSO activity,” said Quilty. “There’s only a handful of players that seem to have adopted a wholesale wait and see approach.”
“[I]ndustry players seem to be recognizing that the megaconstellation approach to capacity expansion represents a sea-change in the economics of the satellite industry,” said Fishman. “We see this recognition across the traditional value chain, from manufacturing and launch through operators and service providers, as well as customers. We also see stakeholders such as insurance providers, regulatory agencies/spectrum administrators, and the financial community sorting out the implications.”
Manufacturers are angling for constellation construction contracts by promoting new smallsat platforms. Launch providers are designing adapters and deployers for constellations, or building new rockets specifically sized for dedicated smallsat missions. And operators of ground-based satellite gateways are installing new antennas around the world to provide turn-key solutions for constellation operators.
Yet even as the entire satellite industry pivots to LEO broadband as the next big thing, no one knows for sure what the stars have in store for today’s constellations.
“It’s not an easy business,” Farrar said. “All of this is complicated.”
This article originally appeared in the March 12, 2018 issue of SpaceNews magazine.
﻿
Orbital ATK unveils new version of satellite servicing vehicle
Satellite communications industry prepares response to future disasters