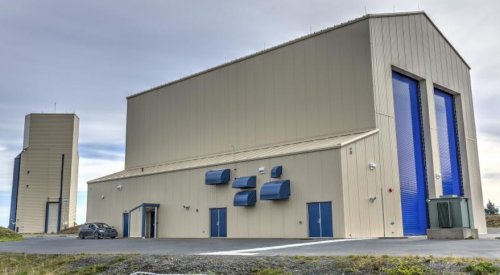 WASHINGTON — An Alaskan spaceport will host the first launch of a rocket developed by a stealthy startup company as soon as next week, spaceport officials confirmed March 20.
Alaska Aerospace Corp., which operates Pacific Spaceport Complex Alaska (PSCA) on Kodiak Island, said the launch period for the flight of the unidentified vehicle runs from March 27 to April 6. It did not specify when during the day the launch would take place.
A “Local Notice to Mariners” issued by the U.S. Coast Guard March 14 included a notice about a rocket launch planned from PSCA, giving a window of March 26 to April 6. The notice included two caution areas, one in waters immediately south of the spaceport and the other several hundred kilometers to the south-southwest, that mariners should stay clear of during launch operations.
The spaceport is releasing few details about the launch itself. “I can only say PSCA is conducting a launch operation called P120 and it is a commercial California company,” said Barry King, director of range operations for Alaska Aerospace, in a March 20 email. “No other details can be provided until after launch.”
King did state that the launch would be suborbital and that, being a commercial launch, would require a launch license from the Federal Aviation Administration’s Office of Commercial Space Transportation. No launch licenses for any vehicles operating from Alaska are included on a publicly available list of active licenses maintained by the FAA, although it is not uncommon for such licenses to be issued shortly before a scheduled launch.
A local newspaper, the Kodiak Daily Mirror, also reported the launch plans, but gave a launch window of April 6-13, a timeframe stated in an earlier Coast Guard notice superseded by the March 14 notice. Craig Campbell, chief executive of Alaska Aerospace, told the newspaper the upcoming flight was “the first truly commercial launch” in the spaceport’s history but did not reveal the customer.
One possibility is that the launch is being performed by a little-known startup company known as Astra Space. Alaska Aerospace signed a contract with Astra Space in 2017 to support launches of that company’s vehicle from PSCA, according to the minutes of an Alaska Aerospace board of directors meeting in August 2017.
Alaska Aerospace “has a contract with Astra to support the first four launches of their small liquid fuel commercial launch vehicle from PSCA. The first launch is planned for December 2017,” the minutes state. It added that it would be the first liquid-propellant launch from the spaceport, which previously had hosted only solid-fuel rockets. “This will be a very innovative launch.”
Minutes from a Nov. 2 meeting of the Alaska Aerospace board stated that “Astra is moving forward” with plans, holding weekly planning teleconferences and paying a $100,000 deposit for a launch date. That launch was planned at that time for “possibly February or later.”
Astra Space has operations in Alameda, California, where it leases a building from the city in an area that formerly hosted a naval air station. The company was originally known as Ventions and worked on a number of propulsion and other technologies under contracts with NASA and DARPA before reincorporating as Astra Space in 2016. The company’s chief executive is Chris Kemp, a former NASA chief technology officer who has been involved with several technology companies since leaving the agency in 2011.
“Astra Space designs, tests, manufactures, and operates next-generation launch services that will enable a new generation of global communications, earth observation, precision weather monitoring, navigation, and surveillance capabilities,” a document describing the city’s lease of a building to the company states. That work includes development of a rocket called Astra that is 12 meters tall and capable of placing 100 kilograms into low Earth orbit, according to a presentation attached to the lease information.
The company goes by the name Stealth Space Company in some job listings. “We believe that space is the ultimate high ground, and we are on a mission to provide routine access to earth orbit for the entrepreneurs and enterprises that are launching a new generation of services powered by small satellites that will connect, observe, and influence our planet,” states the company description on those listings.
In February, a rocket belonging to the company was spotted on the tarmac at the naval air station by a helicopter from San Francisco television station KGO-TV. The rocket appeared to be undergoing ground tests, but the company provided few details about its activities.
Alaska Aerospace has been working for years to attract new users to the spaceport, formerly known as the Kodiak Launch Complex. The launch site last hosted an orbital launch in 2011, when a Minotaur 4 launched the TacSat-4 satellite for the Operationally Responsive Space Office. A failed U.S. Army missile test in August 2014 damaged the spaceport’s facilities, which were repaired and rededicated two years later.
At least one other company developing a small launch vehicle is interested in launching from PSCA. Tucson, Arizona-based Vector announced Feb. 15 that it plans to carry out the first orbital launch of its Vector-R rocket from the spaceport no earlier than July. That vehicle is still in development with additional tests planned before its orbital debut.
﻿
New fund to boost Japanese space startups
#SpaceForce takes Capitol Hill by storm • What is the true cost of space programs? • Space budget deep dive