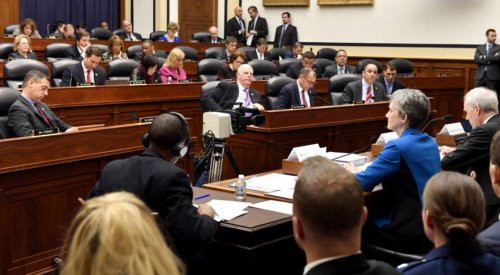 In the aggregated account known as MFP-12 for national security space, the Defense Department requested $12.5 billion for fiscal year 2019.
WASHINGTON — On the question of how much money the Pentagon plans to spend on space programs in fiscal year 2019, different numbers have been floating around. Now we know for certain that the unclassified budget request for national security space is $12.5 billion.
That is what the Pentagon included in the aggregated account known as MFP-12. This is the “major force program” spending category for national security space. It is $1.1 billion higher than the MFP-12 request for fiscal year 2018.
The Air Force gets the majority of the funds — $11.4 billion. The remainder is for space programs run by the Army, the Navy, the Office of the Secretary of Defense and the Defense Information Systems Agency.
Having granular insight into the MFP-12 funding category is not easy, even for experienced number crunchers.
MFP-12 has about 98 program elements. Aerospace industry consultant Mike Tierney, of Jacques & Associates, was able to identify 77 lines from publicly available budget documents.
“The lines we can’t track are mostly support in nature — operations, maintenance, training, personnel — that support the trajectory of the major domain investments,” he told SpaceNews. “They are programs listed by name and PE number that only the Air Force or DoD have the insight on how much is being invested.”
The spending lines that defense and space contractors most care about are investments. The Air Force has $8.5 billion in its space budget for research, development and procurement of new systems.
Air Force Secretary Heather Wilson has characterized the 2019 space budget request as a “bold move” that the service made in order “to be able to deter, defend and prevail against anyone who seeks to deny our ability to freely operate in space,” she told the House Armed Services Committee on Tuesday.
The president’s budget reflects an 18 percent increase over the five-year defense plan, she said, “and that is on top of a 6 percent increase that we presented in the fiscal year 2018 defense plan, to accelerate defendable space.”
Rep. Mike Rogers (R-Ala.), chairman of the House Armed Services strategic forces subcommittee, has chided Air Force leaders frequently for under-funding space accounts.
At the Tuesday hearing, Rogers mentioned that the Air Force’s “unfunded requirements” list included $351 million for space items. “If in fact space has this enhanced priority status within the Air Force, why are those $351 million worth of requirements unfunded?” he asked Wilson.
Her answer: “What we have done in our unfunded priorities list is to accelerate things that are already in our five-year plan.” Lawmakers occasionally ask defense officials to list what they would buy if Congress gave them more money. “The answer is we would accelerate what is already in our five-year plan and that was in three areas. The first was space. The second was nuclear modernization. And the third was military construction.”
Rogers still was not satisfied. “In your opening statement, you made reference to the fact that there was an 18 percent increase over the five-year defense plan. But yet, there is only a 6 percent increase proposed for the 2019 budget. I would really like to see those numbers reversed at least for the 2019 budget. I think more than 6 percent would be a better illustration of priority status.”
﻿
NASA receives $20.7 billion in omnibus appropriations bill
Updated schedule for JWST expected next week