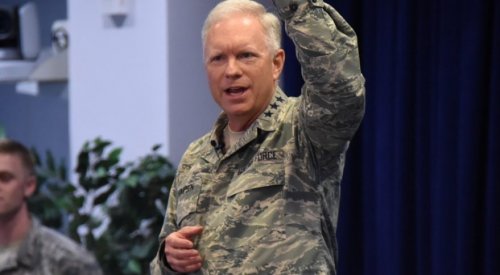 You’re reading the SN Military.Space newsletter we publish Tuesdays. If you would like to get our news and insights for military space professionals before everyone else, sign up here for your free subscription.
Reform fatigue? Space procurement overhaul underway as another reorganization looms

These are uncertain times for many of the agencies and offices in the military-space-industrial landscape. Change is in the air as the Pentagon and Congress embark on an arduous journey to reorganize the space components of the Defense Department. An area that has commanded great attention is what should be done to speed up the modernization of space technologies.
It’s in that vein that the commander of the Air Force Space and Missile Systems Center Lt. Gen. John Thompson hosted industry executives last week in Los Angeles to update them for the first time on “SMC 2.0” — an effort that Air Force Secretary Heather Wilson kicked off earlier this year to reorganize a bureaucracy of 5,000 that oversees a $6 billion space portfolio. 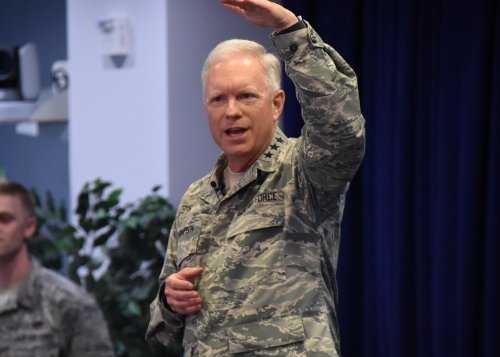 I spoke with one of the executives who attended the meeting at SMC. Rebecca Cowen-Hirsch, senior vice president at the global satellite communications provider Inmarsat Government, said there was a lot of talk of change but few details. Thompson did not discuss the future of specific programs or offices but spoke more broadly about the intent to change the culture of SMC, she said “They are looking to make strategic shifts rather than moving bricks and sticks.”
DEVIL IN THE DETAILS Thompson has been emphatic that “speed” is the number-one thing these days at SMC. To keep program offices working in sync, a colonel will be appointed as “portfolio architect.” And SMC 2.0 will push “partnerships” with commercial companies and foreign allies. “The rhetoric is good,” said Cowen-Hirsch. But how these intents translate into real change in procurements is hard to see at this point. In satellite communications programs, for instance, the focus remains on “programs of record” while pathfinder projects “have hit a wall.”
REFORM FATIGUE? Commercial space companies have wanted change for a long time, and they will believe it when they see it, said Cowen-Hirsch. “Unfortunately what we’re seeing in so much of the Air Force is fatigue, whether it’s reorganization, pressure, challenge to get things accomplished while they’re in the midst of reorganizing. The distraction factor is high.”
SPACE FORCE STUDIES The Pentagon this month is submitting to Congress a study on how to reorganize the Defense Department’s space components and begin the process of creating a separate Space Force. Acquisition is a top concern of Deputy Secretary of Defense Patrick Shanahan, who is the Pentagon’s principal space adviser and has led the reform efforts. Observers say SMC 2.0 may not be the type of dramatic change that Shanahan and other senior officials believe is necessary to create a culture of innovation and agile procurement. 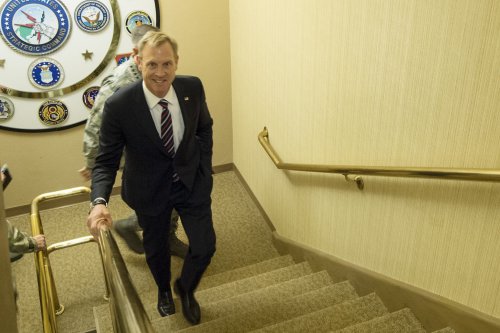 SPACE DEVELOPMENT AGENCY? One proposal that has been floated by DoD is to create an entirely new procurement organization like a Space Development Agency to take over satellites and launch vehicle programs. “There’s people at DoD that want to do a fundamental new start,” said Charles Miller, president of NexGen Space and a longtime space entrepreneur. In space, the culture has to change. “They need to set up a new agency with new values, optimized for partnering with commercial space ventures,” Miller said. “If they don’t it will fail.”
Miller views efforts like SMC 2.0 as a “fig leaf change.” He and others in the industry don’t believe this will fundamentally alter how the Air Force does business. “SMC is optimized for failure-is-not-an-option exquisite space systems. That culture is ‘death’ to commercial partnerships.”
The commercial space industry does not have a “true partnership with the U.S. Air Force,” Miller said. “It has to be more than one token person or office at SMC. Show me the people who are in charge of that process and what budget they have and I can tell you if it’s going to work or not.” 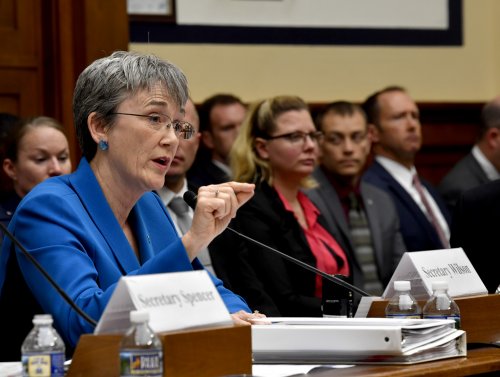 AIR FORCE UNDER PRESSURE Former Secretary of the Air Force Deborah Lee James has predicted the reorganization will be a huge distraction and may slow momentum for change that already has begun under Air Force Secretary Heather Wilson. Wilson has said the service will stay focused on the warfighting mission regardless of how the boxes in the org. chart get moved around. “For me, one of the biggest issues is how do we accelerate acquisition? How do we move the Pentagon forward quickly?” she told The Washington Post. “Because there’s a huge bureaucracy around the acquisition and we’re doing a number of things — not just in space, but more generally to accelerate acquisitions.”
SPACE-BASED MISSILE DEFENSE A HOT TOPIC #SMDSYMPOSIUM

The 2018 Space & Missile Defense Symposium is underway in Huntsville, the Rocket City. What everyone is asking: Where is the Trump administration’s much touted Missile Defense Review? The Pentagon said months ago it would be released this summer. Not even a leaked copy has yet surfaced. A likely reason: The administration’s ongoing effort to negotiate a “denuclearization” deal with North Korea. The MDR at its outset was going to address U.S. plans to defend from North Korea’s ICMBs. Another hot topic: Hypersonic weapons, and how to defend against them. The consensus is that the United States will have to put up sensors in space to fill blind spots in the nation’s antimissile defense system. 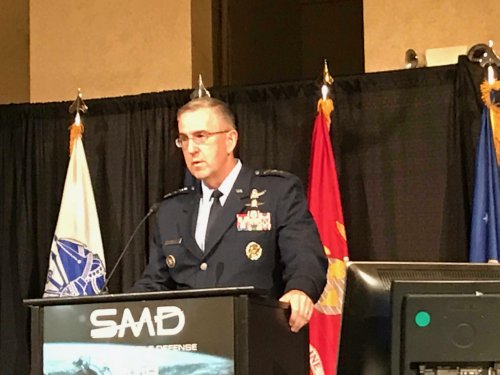 SPACE SENSORS A MUST Russia and China are said to be close to deploying hypersonic glide vehicles — weapons that fly into space at supersonic speeds and then descend back down to Earth directly on top of targets. U.S. missile defenses were not designed for this threat, which has alarmed Pentagon officials and military leaders. “If you can’t see a threat you can’t deal with the threat,” said Gen. John Hyten, commander of U.S. Strategic Command. “The most important thing to me is the sensor technology,” he said. “We have to see and characterize the threat.” The Missile Defense Agency is studying options. Congress also has asked for a study on space-based interceptors, but the administration is not so keen on that idea.
Watch for coverage of #SMDSympoisum this week on SpaceNews.com
NEXT PHASE OF DARPA’S BLACKJACK TO FOCUS ON ‘MOVING DATA TO WARFIGHTER’ – NEW BAA IN THE WORKS
I heard from industry sources that the Defense Advanced Research Projects Agency already has selected at least one satellite bus manufacturer in the closely watched Blackjack program.

DARPA Program Manager Rusty Thomas said he could not confirm that any supplier has been selected. The information is being held in secret for now. “We’ll enter negotiations before we can release who these companies are,” Thomas told me.
This is just the first of three phases in the program — projected to get $125 million in fiscal year 2019 — with the goal of demonstrating “autonomous intelligence, surveillance and reconnaissance operations” with a 20 satellite constellation in 2021 or 2022. At this stage, bus and payload suppliers would start putting together the first two satellites to demonstrate military capabilities in low earth orbit.
“The program is going well,” said Thomas. “We will select a group of payloads, and if we can, more than one bus.”
PIT BOSS COMING A new “broad area announcement” is in the works for the second phase that will focus on data processing technology, specifically the ability to process data onboard satellites to cut down on the latency of moving data to the ground. This could give military commanders in the field a huge advantage, said Thomas. Speed in decision making is of the essence in the battlefield, he noted. The central feature of the second phase of Blackjack is the “pit boss.” That is the avionics box and computing node mounted on each satellite that provides “mission level autonomy.”
BLACKJACK MISSIONS The most likely missions for the prototype constellation will be overhead persistent infrared surveillance (OPIR) and GPS-like positioning, navigation and timing. “OPIR is a really good way to prove that we can do it,” Thomas said. “Another area we’re looking at is PNT to augment existing systems.” Tactical communications from LEO would be another important mission, he said. “We need to move data to the warfighter.”
MILITARY STUDYING WAYS TO APPLY COMMERCIAL SPACE TECHNOLOGY IN ISR, TRANSPORTATION 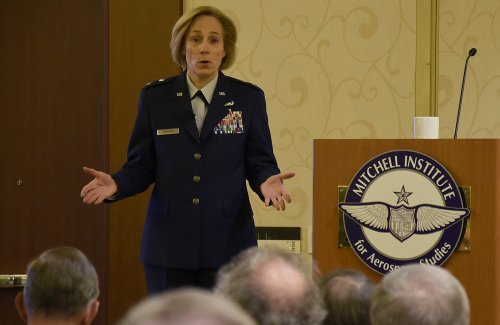 The Air Force has to find a way to capture privately funded innovation, “include it in our scheme and program investments” said Lt. Gen. Veralinn “Dash” Jamieson, Air Force deputy chief of staff for intelligence, surveillance and reconnaissance. In the next two to four years there will be “tens of thousands of commercial satellites providing electro optical, infrared, radar and hyper spectral imagery that will be mapping the globe in minutes, available for anyone to purchase,” she said. “I’m talking about ubiquitous coverage.”
The rise of commercial space was factored into the Air Force’s strategy and investment plan for the collection, processing and distribution of intelligence. The basic problem the Air Force is trying to solve is that its intelligence collection and analysis methods are still very much from the pre-digital age: platform-centric and very labor intensive.
The answer is that a dramatic change will be needed in how the Pentagon acquires and applies technology. Space-based capabilities are viewed as essential but even more disruptive and transformative will be artificial intelligence.
“Space was not the biggest thing we saw. It was the machine intelligence piece.” 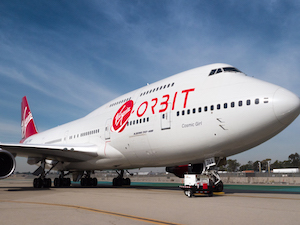 SPACE TRANSPORTATION Commercial space vehicles designed to fly satellites into orbit could be used by the military one day to move cargo around the world. “It’s certainly in the cards and available to the military to develop over the next decade,” said Dan Hart, CEO of Virgin Orbit. The commander of Air Mobility Command Air Force Gen. Carlton Everhart last week talked about the possibilities of applying commercial space technology to military logistics. Point to point travel using suborbital flight has been talked about for years, Hart said. “There’s no barrier to that.” If the military wanted to transport cargo across the globe, the technology is available to do that, but a lot of planning and engineering would be required. “We do have technology in launch, re-entry systems and landers that show we can transport high value cargo and land it safely. A container coming from space could re-enter the atmosphere using parachutes or gliding, like the military X-37 spaceplane does. Some of those details would have to be worked out.