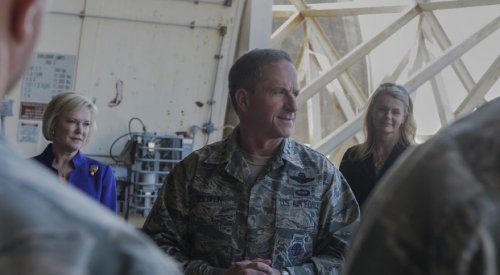 WASHINGTON – Military space programs need greater acquisition agility, and a realignment that will allow decisions to be made faster, the top U.S. Air Force general said Friday.
“We have to have an honest discussion about acquisitions,” said Gen. David Goldfein, the Air Force chief of staff at a Capitol Hill breakfast hosted by the Air Force Association’s Mitchell Institute for Aerospace Studies.
The general pointed to comments made by Rep. Mike Rogers (R-Ala.) who noted that there are about 60 organizations involved in making acquisition decisions for space.
Any one of those groups are “able to either slow down or stop progress,” Goldfein said. “Ladies and gentlemen, this is no way to run a railroad.”
But it might not require a complete reorganization of existing offices, Goldfein said, and he cautioned against moving around “boxes and lines” on an organizational chart that ultimately results in no gain. Instead, the Pentagon needs to streamline the decision-making process.
“In my opinion, we don’t actually have an organizational problem. We have an authority-for-decision-making problem,” he said. “We must make some tough but essential decisions about who is responsible for setting space requirements and who is responsible for acquiring against those requirements.
“When you have so many folks and you all have to get them to line up and everyone has to say ‘yes, I approve that,’ what happens is you wind up with a stagnation in the decision making along the way, and that just automatically starts raising costs,” Goldfein continued.
It’s one of the top conversations he wants to have in the Pentagon soon, the general said, noting that the future of space is “perhaps the most important debate we will have this year.”
“Ultimately our challenge is staying ahead of any potential adversary,” he said. “Which we’re ready to do, and we’ll do it even better given the right authorities and the responsibilities built upon agile acquisition.”
Space is an essential part of U.S. warfighting strategy, and Goldfein noted that “over 90 percent of what [the Defense Department] has in space is Air Force.”
“We will own the high ground and we will use it to win the fight,” he said. “I don’t think anyone would trade our space capabilities with any other nation on the planet.”
The general said he is looking for opportunities to ensure that space is treated as “a joint warfighting domain no different than any other warfighting domain.”
Part of that comes down to language, and the Air Force is working on a concept of operations, or ConOps, for space that will be written to mirror documents used for terrestrial arenas.
“Only when we think about and talk about space in the same way that we talk about operations in the air, on land, at sea, or in cyber, will we move in the direction of truly integrated space operations, across all warfighting domains,” Goldfein said. “We cannot allow space to have its own unique lexicon, with its own unique org chart, with its own unique force, or its own unique way of operating…You will be hard pressed to find a mission the joint force performs that is not heavily reliant on the integration of space capabilities.”
Goldfein also said he hopes people understand how much society relies on space, from smartphones and bank machines to traffic lights and GPS.
“I’m actually thinking of starting a new information campaign: Send a tweet? Thank an airman!” he said.
The general – who just returned from a trip to visit several Air Force space bases and industry partners – also recognized several leading space companies.
“At SpaceX they have a vision, they’re going to Mars. And I believe they’re going to do it. And as an airman I love it,” Goldfein said. “Mars, bring it. We’ve been breaking barriers since 1947.”
In fact, that’s where Goldfein said he wants to be for an important anniversary.
“This has been our business since 1954 and I hope it will remain so through 2054,” he said. “And I hope when we celebrate our 100 year anniversary in space, [that] we do it at our [Air Force Association] convention on Mars, because SpaceX did it.”
﻿
Boeing, Air Force, pen agreement to oversee GPS 2 for next five years
Panasonic Avionics subject of federal corruption probe