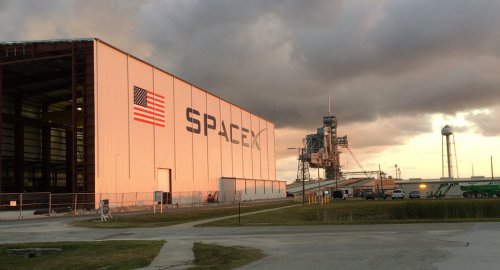 SpaceX is now planning a Feb. 18 launch of a space station cargo spacecraft on its first mission from a historic launch pad.
The company said Wednesday it is targeting that date for the launch of an upcoming Dragon cargo spacecraft, pending the outcome of a static-fire test on the pad and the assignment of a launch license from the FAA.
The launch will be the first for SpaceX from Launch Complex 39A at the Kennedy Space Center, previously used by the shuttle program. SpaceX plans to attempt a landing of the Falcon 9 first stage on a pad at Cape Canaveral, which it has done on two prior launches. [Florida Today]
More News
NASA’s Michoud Assembly Facility in New Orleans remains closed after a tornado hit the center Tuesday. Emergency crews are continuing to assess damage there, reporting that 40 to 50 percent of all of Michoud’s buildings suffered some kind of damage, including five buildings with severe damage. Workers plan to reexamine the Vertical Assembly Center, used to weld components of the Space Launch System, after finding some electrical damage to a power substation there. Among the items damaged at Michoud was the first shuttle external tank, a structural test article stored outdoors that was “sent flying and destroyed” during the storm. [NASA / collectSPACE]
Companies that operate large launch vehicles are working to better serve the smallsat boom. At a smallsat conference this week, representatives of several launch providers said they are working to provide more rideshare opportunities for smallsats. SpaceX is considering “multiple missions dedicated to flying secondary payloads” on its Falcon 9 rocket. They will face competition from a growing number of dedicated smallsat launch vehicles under development, some of which plan their initial launches this year. [SpaceNews]
An errant contract posting may have been the trigger for Orbital ATK’s lawsuit over a DARPA satellite servicing program. Orbital ATK filed the suit Tuesday, a day after DARPA briefly posted a contract announcement that stated it was awarding an agreement to Space Systems Loral for the Robotic Servicing of Geosynchronous Satellites (RSGS) program. DARPA soon took down the notice, and had previously postponed a media teleconference about the RSGS award, but Orbital went ahead with the suit, citing SSL as the winner. [SpaceNews]
FAA’s commercial space office is facing a budget crunch. The Office of Commercial Space Transportation hired 19 new people after the House and Senate included a $2 million increase in the agency’s 2017 budget in their appropriations bills. Those bills, though, did not become law, and the office is operating through April under a continuing resolution that funds it at its lower fiscal year 2016 levels. George Nield, FAA associate administrator for commercial space transportation, said at a conference this week that “we’re really scrambling right now to make ends meet” because of the reduced budget. [SpaceNews]
U.S. Strategic Command (STRATCOM) has signed a space situational awareness data sharing agreement with Belgium. STRATCOM signed the agreement Tuesday with the Belgium Federal Science Policy Office, allowing the U.S. and Belgium to exchange information on the orbits of satellites and other objects. Belgium joins more than ten other nations, as well as several organizations and more than 50 companies, that have similar sharing agreements with STRATCOM. [SpaceNews]
NASA is renting out a giant pool used for astronaut training to help make ends meet. The Neutral Buoyancy Lab at the Johnson Space Center is used to simulate weightlessness conditions for training astronauts and practicing spacewalks outside the ISS. With NASA’s requirement for the pool reduced since the completion of the station’s assembly, NASA is renting out the pool about three days a week to companies, particularly in the oil and gas industries. NASA is open to additional commercial use of the lab, an official said, but with some limits: “We’re not going to have an underwater wedding or anything like that.” [Ars Technica]
The first nuclear explosion on Earth could help scientists understand the formation of the moon.Scientists analyzed glass dubbed “trinitite” created by the July 1945 test at the Trinity site in New Mexico, measuring the composition of the glass at different distances from ground zero. Those studies found fewer volatile elements closer to ground zero, indicating they were vaporized during the explosion. That can explain why the moon, created in a massive collision between the Earth and a large protoplanet, also lacks those more volatile elements. [Space.com]
﻿
Launch providers making room for smallsat boom
FAA commercial space office faces budget squeeze