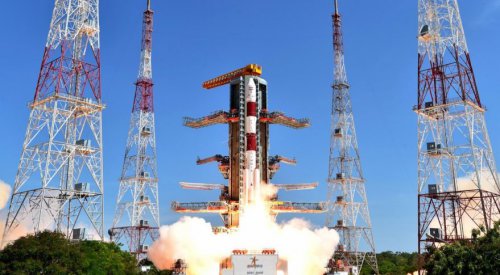 The countdown is underway for the launch of more than 100 satellites on an Indian Polar Satellite Launch Vehicle tonight.
The launch of the PSLV-C37 mission is scheduled for 10:58 p.m. Eastern tonight (9:28 a.m. Indian time Wednesday) from the Satish Dhawan Space Centre.
The primary payload for the mission is the Cartosat-2D imaging satellite, but the rocket is also carrying two smaller Indian satellites and 101 cubesat-class spacecraft.
Those cubesats include 88 satellites for Planet and eight for Spire. [PTI]

More News
The Air Force’s X-37B spaceplane could be returning to Earth as soon as today. The X-37B, launched in May 2015, has lowered its orbit recently, a sign that it may be preparing for a landing based on previous missions. One report predicted a landing at the Kennedy Space Center’s Shuttle Landing Facility runway this morning, but there were no initial reports of a landing at the specified time. This would be the first X-37B mission to land at KSC, after earlier missions landed at Vandenberg Air Force Base in California. [NASASpaceFlight.com]
An Ariane 5 is set to launch two communications satellites late today. The Ariane 5 is scheduled to launch at 4:39 p.m. Eastern from French Guiana, at the opening of a launch window that runs for nearly 90 minutes. The Ariane 5 is carrying the SKY Brasil-1 and Telkom 3S communications satellites for DirecTV Latin America and Indonesia’s PT Telkom, respectively. [Spaceflight Now]
NASA’s Michoud Assembly Facility reopened for mostly normal operations Monday, with some exceptions. Michoud had been closed since a tornado hit the center last Tuesday, damaging a number of buildings. Seven buildings remained closed as of Monday, including three that suffered “significant” damage. Some work for the Space Launch System and Orion programs is resuming at the center in the main manufacturing building, which sustained damage in the storm. [NASA]
A new report offers details on a proposed lander mission to Jupiter’s moon Europa. The lander, which could launch as soon as 2024, would spend 20 days on the surface of the icy moon, looking for evidence of past or present life on and just underneath its surface. The lander mission would launch on an SLS and spend more than a year and a half in orbit around Jupiter prior to landing on Europa. The lander would be a follow-up to a multiple flyby mission, widely known as Europa Clipper, that is proposed to launch in 2022. The cost of the lander mission has not been disclosed. [SpaceNews]
A Canadian company wants to develop a satellite constellation to serve the growing “Internet of Things” market. Kepler Communications is proposing to create 140-satellite constellation of cubesats that will provide data services for network-connected devices. The company has raised $5.5 million to date and has two cubesats on order from Scottish manufacturer Clyde Space, and has also filed a license application for its full constellation with the FCC. [SpaceNews]
The failed launch of a Japanese small rocket last month was likely caused by an electrical problem. An investigation into the failed mid-January launch of the SS-520-4 rocket, a converted sounding rocket, found that electrical wiring was damaged by the heat and vibration of the launch, creating a short circuit that cut power to a data communications system. Controllers aborted firing the rocket’s second stage after losing telemetry. Japanese officials have indicated they will attempt another launch of the rocket, intended for very small satellites, as soon as later this year. [Kyodo]
A new analysis of archived data has turned up evidence for more than 100 new exoplanets.Astronomers analyzed data collected by a high-resolution spectrometer at the Keck Observatory over 20 years, looking for telltale shifts in spectral lines of stars created when the gravity of orbiting planets tugs on the star. The new analysis found 60 “planet candidates” and 54 additional signals that could also be caused by exoplanets. [Space.com]
Hackers are helping “rescue” NASA Earth science data they fear could be removed by the new administration. One group spent the weekend downloading data from NASA servers, archiving it and making plans to check it against alteration, out of concerns it could be modified or deleted. As of yet, though, there is no evidence that the administration has ordered the removal of any NASA data from publicly-accessible servers. [Wired]
An American-educated pioneer of China’s space program has passed away at the age of 101. Ren Xinmin earned a doctorate in engineering from the University of Michigan in the 1940s, but returned to China in 1949 and later worked on China’s first missile and first satellite. Ren was the chief designer of six major space projects, including communications and weather satellites. [gbtimes]
﻿
Report lays out science case for Europa lander
Orbital ATK sues DARPA to stop SSL from winning satellite-servicing contract