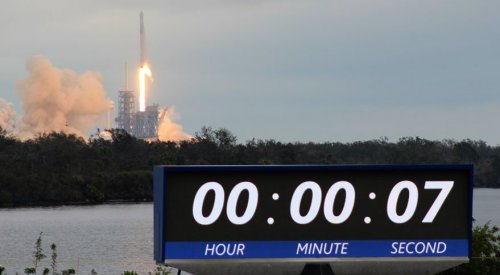 KENNEDY SPACE CENTER, Fla. — A SpaceX Falcon 9 lifted off for the first time from a launch site here previously used by Apollo and shuttle missions Feb. 19, placing a Dragon cargo spacecraft into orbit.
The Falcon 9 lifted off from Launch Complex 39A at 9:39 a.m. Eastern and placed the Dragon cargo spacecraft into orbit 10 minutes later. The rocket’s first stage successfully landed at Landing Zone 1, a former launch site at neighboring Cape Canaveral Air Force Station, eight minutes later.
The initial launch attempt Feb. 18 was scrubbed just 13 seconds before liftoff because of a problem with the thrust vector control system in the rocket’s second stage. SpaceX Chief Executive Elon Musk said in a series of tweets after that he halted the launch because the performance of a hydraulic piston in that system looked “slightly odd.”
Musk said there was a 99 percent chance that the problem would not have affected the launch, but “but that 1% chance isn’t worth rolling the dice. Better to wait a day.” The faulty component was replaced overnight, according to SpaceX sources, and the rocket cleared for the launch.
The Dragon, flying a mission designated SpX-10 by NASA and CRS-10 by SpaceX, is carrying 2,490 kilograms of cargo for the ISS. The bulk of the Dragon’s payload are experiments and instruments, including several Earth science sensors and technology demonstrations carried in the Dragon’s external trunk that will later be mounted on the station’s exterior. Less than 300 kilograms of cargo is devoted to crew supplies.
“We’ve got well above our reserve levels of food and water, so we’ve really dedicated this Dragon mission to the research,” said Dan Hartman, deputy manager of the ISS program at NASA, at a Feb. 17 pre-launch press conference.
The launch is the the first from LC-39A since the space shuttle Atlantis lifted off on the final space shuttle mission, STS-135, in July 2011. NASA leased the pad to SpaceX in 2014, who converted the pad originally for use for crewed launches of the Falcon 9 as well as its upcoming heavy-lift vehicle, the Falcon Heavy.
SpaceX, though, has pressed the pad into use for other Falcon 9 missions after an explosion during preparations for a static-fire test Sept. 1 damaged the company’s other Florida pad, Space Launch Complex 40 at Cape Canaveral Air Force Station.
“It’s a historic pad, and we’ve taken good care of it during the refurbishment and the rebuild,” SpaceX President Gwynne Shotwell said at a Feb. 17 press conference adjacent to the launch site.
Using LC-39A allowed SpaceX to resume Florida launches, including ISS and commercial satellite missions, sooner than if they had to wait for repairs at SLC-40 to be competed. “Frankly, the fact that we were this close to operations on 39A when we had the event on Sept. 1 of last year was enormously helpful,” she said. “It obviously takes longer to rebuild that pad than to get this one up and running.”
While SpaceX finished preparations for the pad for regular Falcon 9 launches, Shotwell said there is still more work to do to prepare the pad for crewed missions. “We’ve got a crew arm to put in, and we’ve got other updates as well,” she said. Those upgrades are scheduled to be done by November, SpaceX’s current schedule for launching an uncrewed test flight of its Crew Dragon vehicle.
The pad will also host the long-delayed first launch of the Falcon Heavy, which Shotwell said would take place this summer. Preparations for that launch will begin once repairs to SLC-40 are completed, which Shotwell said should be in June, allowing Falcon 9 launches to resume there.
Later upgrades could involve increasing the height of the fixed service structure at the pad. Shotwell said that would be required to meet U.S. Air Force requirements for vertical integration of payloads onto Falcon rockets. Those payloads are currently installed while the rocket is horizontal prior to rolling out to the pad and being moved into the vertical position.
Shotwell didn’t give a specific figure for the cost of refurbishing LC-39A. “I think it might be less than $100 million,” she said, when asked about a $100 million figure she had previously given as the estimated cost of a new launch site. “But I think when it’s fully outfitted for crew and [national security space], it will be well over that.”
The launch is also major milestone in the efforts by the Kennedy Space Center to repurpose its facilities for non-NASA users and become when they call a “multi-user spaceport.” In addition to the lease of LC-39A to SpaceX, KSC has leased three shuttle-era processing hangars to Boeing for use by the CST-100 Starliner commercial crew vehicle and X-37B classified spaceplane. Space Florida, a state space development agency, has taken over operations of the Shuttle Landing Facility runway.
“Pad 39A, we didn’t need it,” said Bob Cabana, the director of the Kennedy Space Center, in a Feb. 17 briefing. NASA elected to renovate neighboring Launch Complex 39B for the Space Launch System and, potentially, other customers. “Pad 39A would have just sat out there and rusted away in the salt air” without a lease to SpaceX.
“We set our goals out, five, six years ago, and laid out what we wanted to be. And, through an iterative process, we’ve made everything that we wanted to happen, happen,” he said.
﻿
NASA to keep Juno in longer orbit
Expert panel supports study to accelerate first crewed SLS mission