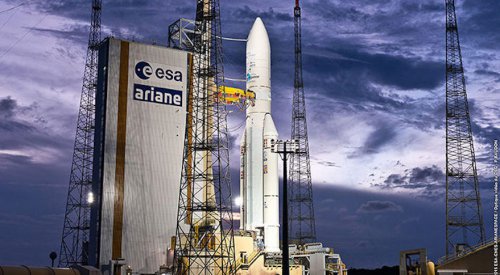 WASHINGTON — Facing looming regulatory deadlines, Inmarsat announced Dec. 8 it was moving the long-delayed launch of a satellite to provide aeronautical broadband services from SpaceX to Arianespace.
In a statement, the London-based satellite operator said the launch of an S-band satellite for the European Aviation Network (EAN) would now take place on an Ariane 5 in mid-2017. The satellite, which also includes a Ku-band payload for Hellas-Sat in a so-called “condo-sat” arrangement, was planned to launch on a Falcon Heavy.
“We are delighted with the flexibility that Arianespace has shown in being able to provide a launch slot that enables us to place our European Aviation Network S-band satellite in orbit by mid-2017,” Michele Franci, chief technology officer of Inmarsat, said in a company statement.
Inmarsat had previously suggested it was looking at alternative launch options for the satellite. European regulators originally had a deadline of this month for launching the satellite. However, the Falcon Heavy has yet to perform a launch, and delays in its development, exacerbated by the stand-down in Falcon 9 launches after a Sept. 1 pad explosion of a Falcon 9 during preparations for a pre-launch test, made it uncertain when the Falcon Heavy would be ready for the EAN satellite.
“All things being equal we are actively looking at the ability to maintain schedule,” Rupert Pearce, chief executive of Inmarsat, said in a Nov. 3 conference call with investors, discussing backup plans for the EAN satellite. At the time, he said one possibility was moving the satellite to a Proton rocket through a contract with International Launch Services. “But we do have other options as well, which we will look to execute on in the next few weeks,” he added.
The announcement did not indicate if Inmarsat was canceling the SpaceX contract outright, or reserving it for a future mission. Inmarsat has contracts for two other satellite launches with SpaceX, including its next Global Xpress satellite, Inmarsat 5-F4, on a Falcon 9 in the first half of 2017. That contract remains in place, Inmarsat stated.
“Inmarsat is looking forward to continuing to work with SpaceX going forward,” the company said in its statement.
﻿
ANTARCTICA PICTURES
SpaceX punts Falcon 9 return-to-flight launch to January