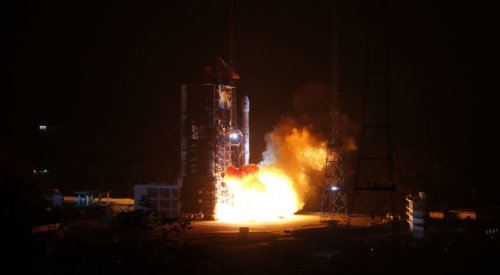 WASHINGTON — A little over a year after the launch of its first satellite, Belarus’ state-owned telecom satellite operator, Belintersat, says its commercial sales efforts are bearing fruit.
Belintersat-1, a C- and Ku-band satellite from China Great Wall Industry Corp, with payloads from France-based Thales Alenia Space, launched in January 2016 aboard a Chinese Long March 3B rocket.

Belintersat is focusing its satellite capacity on international markets in order to generate a new source of revenue for the tiny Eastern European state of 9.5 million people.
Located at 51.5 degrees east, Belintersat 1 carries 20 C-band and 18 Ku-band transponders covering Europe, Africa and part of Asia. Nigerian Communications Satellite (NigComSat) performed in-orbit testing and is providing carrier spectrum monitoring services for the lifetime of the satellite, which is designed to last 15 years. Export-Import Bank of China provided a preferential credit line for the satellite.
Belintersat’s Deputy Development Director, Andrey Abramov, says the operator is motivated by the challenge of competing with much better-known satellite operators from better-known countries. In an interview with SpaceNews, Abramov discussed Belintersat’s first year of operations and long-term plans to become a multi-satellite operator.
As a commercially focused operator, how much capacity have you sold on Belintersat-1? How much of that sold capacity is domestic, and how much is international?
That is a very good question, which unfortunately I can’t disclose. I can just say that for the first year, we’ve done a good job and found partners, an official distributor and clients.
In percentage equivalent, the amount of domestic capacity is around 5 percent — it’s really enough to cover our market demands, and also because the project’s purpose is mainly international, aimed at stimulating export services on foreign markets covered by our satellite.
Is the state of Belarus continuing to support Belintersat? Will the government continue to be involved with Belintersat long term?
Definitely, the answer is and will be yes. It’s a governmental project. The Belintersat-1 satellite is the property of the Republic of Belarus and is operated from the Belintersat Ground Control Center, located 40 kilometers from Minsk, the capital of Belarus.
Governmental protection and support also means a lot for our clients’ safety and insurance. Nevertheless, the project itself is commercial and focused on profit, which makes it interesting for the whole team to work on.
What protection and support does the government of Belarus provide to Belintersat? Does the state support allow Belintersat to sell capacity at a price lower than other satellite operators?
The Belarusian government greatly supports and pays a lot of attention to the Belintersat project. It was mainly due to the guarantees of the government that the loan for the National Satellite System building and development was obtained, which gave life to the project itself.
At the same time, we are working on the satellite communication services market on the basis of its supply and demand: actual prices. Our actions are in many respects compatible with the behavior of other satellite operators: taking into consideration the customer’s requirements, the features of our project and Belintersat-1 satellite characteristics.
What international markets have shown the most promise for Belintersat so far?
Our coverage of Africa, both in C- and Ku-bands, is really great, so it is considered probably the most interesting market for us so far. From another side, the Asian market has a lot of prospects and right now we’re involved in looking for a business partner within this continent. The European market, from its side, is interesting in terms of broadcasting and TV-channel distribution.
So, each market has its own specifics and all of them have their advantages. We plan to investigate and use both for benefit of our customers and the Belintersat project.
How does Belintersat benefit the citizens of Belarus?
Currently, the benefits are mostly nonmaterial: it serves for popularization of the country and helps to extend the distribution areas for our manufacturers. These are the first small steps that help us to create a good impression about our country that is aimed at building good relations with others. In such a case, all the citizens benefit.
Belintersat has talked openly about creating international partnerships for providing telecommunication services. Will this be a continuing theme?
Yes, absolutely! We’re so happy about having established those partnerships, as it’s not easy to operate on this market having just one satellite. During last few years the satellite market changed a lot — customers need turnkey solutions from satellite operators, and we are to become integrators. Partnership with other companies is the best way out, in our mind. Both with our partners we can join our experience and facilities for all the sides’ interests. And we appreciate the help and support of our official distributor, Belinter Media Company.
Belintersat has mentioned wanting to eventually own more than one satellite. What are your thoughts so far about a second satellite?
Yes, we do have such plans. As every system, it usually is not composed of a single thing; that is why we are hoping that Belintersat-1 is just the beginning of creating the Belarusian satellite system. Before making a decision, we will investigate current requests of our customers and the market.
What is your approach to financing future satellites? Will export-credit agencies continue to play an important role?
As it’s a big investment process with a lot of money involved, such projects are usually supported by the government, or by big businesses. After making a decision about the business case, we will decide about financial sources.
Is Belintersat interested in high-throughput satellites, or is your focus on traditional, wide-beam satellites?
Of course, we are interested in high-throughput satellites in the future, but first we will pay attention to the customers’ needs and requests. If our customers are interested, we will make the right decision. Moreover, we have some time to see how the high-throughput satellites operators will be faring on the market.
There is a lot of discussion of capacity oversupply today. Are you concerned oversupply will make it difficult to capture business in international markets?
You’re right, the global telecom market is experiencing the capacity oversupply, but we have really good options for two-way connectivity between the continents that allows us to make good proposals to our customers together with our partners.
﻿
ULA delays launch of Air Force communications satellite due to booster issue
SpaceX delays force Spaceflight to find alternative launches