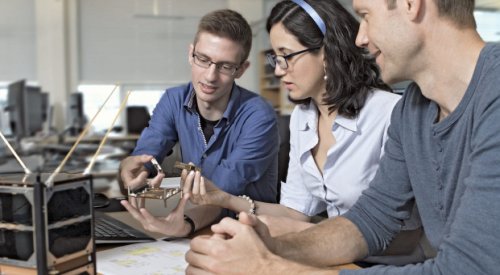 To receive FIRST UP Satcom, a weekly SpaceNews newsletter for satellite and telecom professionals, sign up here.
TOP STORIES
An agreement reached in the U.S. House of Representatives June 18 could keep the Export Import Bank of the United States open until 2026. The bipartisan deal, led by House Financial Services Committee Chairwoman Rep. Maxine Waters (D., Calif.) and Rep. Patrick McHenry (R., N.C.), would ensure the bank stays fully operational for the next seven years. Ex-Im Bank’s current charter expires in September. Advocates for Ex-Im Bank, which helps finance satellite manufacturing and launch deals among other exports, recently suggested 10-year authorizations instead of the average timespan of three to five years. [Wall Street Journal]
Cubesat builder GomSpace is conducting another round of layoffs. The Danish company said June 18 it will cut up to 30 employees this month in an effort to reduce costs. The layoffs follow earlier cuts in November and January stemming from a missed payment by constellation customer Sky and Space Global. Despite the reduction in staff, GomSpace said it is “continuing to build up the engineering capacity” needed to support ongoing work with the European Space Agency across Denmark, Luxembourg and Sweden. [GomSpace]
Inmarsat’s government division won a blanket purchase agreement from the U.S. Defense Department worth up to $246 million over five years. The agreement is structured as a one-year base period starting June 19, followed by four 12-month options. Of 28 offerors solicited, two provided quotations for the competition. Inmarsat will provide unspecified “commercial satellite communications services” through the agreement, which was contracted by the Defense Information Technology Organization. [U.S. Defense Department]
MORE STORIES
Viasat says that supplier issues are delaying the first launch of its ViaSat-3 satellite. In a filing with the FCC this week, the company asked for an extension of the deadline for bringing that satellite into service until the end of 2021, citing problems with an unnamed vendor for the satellite’s payload. In contrast to most satellite operators, Viasat is building its own payloads rather than tasking a manufacturer. That first of three ViaSat-3 spacecraft will serve the Americas and transoceanic routes. [SpaceNews]
Signal geolocation startup Kleos Space received 1 million euros ($1.12 million) in financial support from the government of Luxembourg for its smallsat constellation. The funding is contingent on the success of a four-satellite “scouting mission’ expected to launch in August. Through the funding, Kleos Space, will be able to apply for European Space Agency Business Applications Program support as well, with a contract possible by the end of the year. Kleos Space is planning a constellation of 20 satellites in low Earth orbit to detect radio frequency signals. [Kleos Space/Breaking Defense]
Four more African countries have authorized Globalstar to use its S-band satellite spectrum for cellular LTE communications. South Africa, Mozambique, Gabon, and Rwanda join Botswana in granting the regulatory approvals. Globalstar said it has formed local subsidiaries to offer satellite and cellular services in the countries, which collectively number more than 100 million people. [Globalstar]
Several former executives of a satellite operator have started a new satellite manufacturer. Saturn Satellite Networks will build satellites ranging from 600 to 1,700 kilograms, and already has a customer order. The company’s executive chairman is Tom Choi, former CEO of satellite operator ABS, and two other former ABS executives are also in key positions at Saturn. The company is targeting as customers those nations who want their own satellite but for which a traditional multi-ton spacecraft is too large. [SpaceNews]
Honeywell has won a contract to build a quantum communications demonstration satellite for the Canadian Space Agency. The $30 million Canadian ($22.4 million) contract covers development of the Quantum EncrYption and Science Satellite (QEYSSat), scheduled for launch in 2022. The satellite will test the use of quantum encryption technologies for satellite communications. [SpaceQ]
Five Indonesian connectivity services providers have chosen Hughes Network Systems’ Jupiter ground infrastructure to support the rollout of internet access and cellular backhaul sites across the country. The five providers won bids from Indonesia’s Ministry of Communications and Information to expand connectivity using more than 7 gigahertz of satellite capacity across multiple satellites. Hughes said the providers, which include Lintasarta, Teleglobal and satellite operators Pasifik Satelit Nusantara and Telkom/TelkomSat, each chose its infrastructure independently. [Hughes]
Avanti is shifting its business plan away from consumer broadband to providing capacity to other satellite operators. Avanti reported $53.5 million in revenue for 2018, down $3.1 million from its previous fiscal year. Despite the decline, Avanti said it gained financial momentum in the last six months of 2018 by executing on its revised strategy. The company announced recent deals with Viasat and Turksat, providing them with capacity on its satellites, and is also doing business with the U.S. Defense Department. [SpaceNews]
SpaceNews Senior Staff Writer Jeff Foust contributed to this newsletter.
﻿
Contractors continue to win award fees despite SLS and Orion delays
UK Export Finance steps up space sector focus