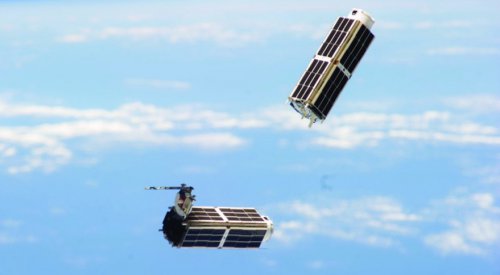 WASHINGTON — A regulatory system crafted a quarter-century ago is failing to keep up with an evolving commercial remote sensing industry, which companies say is slowing down their efforts to develop new satellite systems and capabilities.
At a remote sensing policy event here March 15 organized by the Satellite Industry Association, panelists argued for changes regarding what is regulated and how to better handle an increasing number of companies proposing novel satellite systems and large constellations of spacecraft.
“We’ve traditionally had an aerospace mentality about this kind of capability,” said Kevin O’Connell, president and chief executive of Innovative Analytics, a consulting company. “It’s really moved to much more of an information services mentality, which, if regulated at all, is regulated in a completely different way.”
Rich Leshner, vice president of government affairs for Planet, a company that currently operates nearly 150 small imaging satellites, noted that the regulations for the industry, enabled by a 1992 law, have not kept pace with recent changes in the industry that focus less on resolution improvements and more on increasing the frequency of imagery and other data collected by such spacecraft.
“What that has transitioned this industry into is a digital information services industry,” he said, “something that is essentially an entirely different industry that is regulated now as compared to the industry that was created by the framework for regulating this industry back in the 1990s.”
DigitalGlobe, which had its origins in the 1990s, also believes that regulatory system needs to change with the industry. “The regs and the statutes were set in a completely different world than we have now,” said Marcy Steinke, senior vice president for government affairs at DigitalGlobe.
Steinke called for a “culture shift” in the regulatory process to reflect a changing industry, including a predisposition to support company proposals unless the government can find specific national security issues with them. She noted that while the law says the government must respond to a waiver request, such a change in resolution, within 120 days, DigitalGlobe has been kept waiting for more than a year in some cases.
“It’s kind of going from a restrictive environment to a permissive environment,” she said. “It requires a shift in culture, a shift in thinking.”
A key issue for the industry has been the small office within the National Oceanic and Atmospheric Administration that licenses commercial remote sensing system. The growing number and diversity of proposed systems has created a backlog of applications.
During a panel session at the Satellite 2017 conference March 7, Tahara Dawkins, director of commercial remote sensing regulatory affairs at NOAA, said that prior to 2011, it took her office an average of 51 days to complete a review of a license application. That timeline, she said, was possible given the similarity in concepts for satellite systems being proposed.
The situation is very different today. “What I’m getting in my office now is that, from one application to the next, they just don’t look alike,” she said. “Every week we’re getting applications with technology we just haven’t seen yet. And so we have to look at it and give it a thorough review.”
Dawkins also acknowledged that her office is understaffed. “There’s no way we can keep up with the demand of this U.S. industry with the way we have been doing business,” she said.
Other challenges come from novel applications that create uncertainty about how they should be regulated, and by whom. “We’ve started calling ourselves the ‘regulatory orphans,’” said Russ Matijevich, vice president of HawkEye 360, a company planning a satellite system to perform commercial signals intelligence, at Satellite 2017.
His company, he said, is not clearly covered by either commercial remote sensing, licensed by NOAA, or communications, licensed by the Federal Communications Commission. “We fall into the gaps between these existing regulatory schemes,” he said. “For us, we found out there is nobody in the U.S. government that regulates what we do.”
Matijevich said his company has had discussions with U.S. government officials on how they should be regulated to ensure the government meets its treaty and national security applications. He described those discussions as “very good” but, he added, “I don’t think we have an answer yet.”
Dawkins said that her office at NOAA is trying to evolve to address the changing market while also protecting national security and foreign policy interests. “That is the cutting-edge question of the decade,” she said. “I don’t think we have an answer to that yet. As the industry evolves, we have to evolve with it, and that’s what we’re trying to do now.”
﻿
Why SES all but skipped Satellite 2017
China studying reusable rockets similar to SpaceX