Space tech news » News » Nearly every engine stockpiled for use on upper stages of Proton rockets has defects, investigation concludes 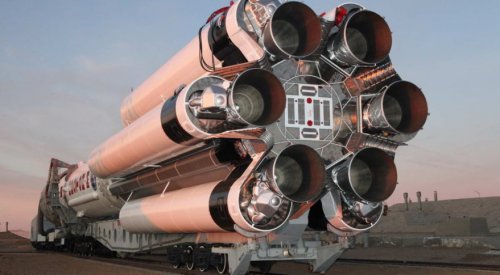 Nearly every engine stockpiled for use on the upper stages of Russia’s Proton rocket has defects, an investigation concluded.
Igor Arbuzov, head of state rocket engine manufacturer Energomash, told Russian media this week that 71 engines built by Voronezh Mechanical Plant for use on the Proton’s second and third stages require “complete overhauls” to correct defects found in the engines.
Proton launches were halted after the discovery of the engine defects, linked to the use of incorrect solder in the engines, prompting the broader review.
The report did not indicate if that finding would further delay Proton’s return to flight, planned for April or May. [The Moscow Times]

More News
SpaceX demonstrated reusable rocketry Thursday night with the successful launch of a satellite on a “flight-proven” booster. The Falcon 9 lifted off on schedule at 6:27 p.m. Eastern from the Kennedy Space Center and placed the SES-10 satellite into geostationary transfer orbit a little more than a half-hour later. The launch used a first stage previously flown on a Dragon cargo mission last year, and the stage again made a successful landing on a ship. SpaceX CEO Elon Musk also said the company was able to recover the rocket’s payload fairing for the first time. Musk said the launch demonstrated the ability of the company to reuse rockets, which could offer dramatic reductions in launch costs over time. [SpaceNews]
A NASA astronaut set a record during a spacewalk outside the International Space Station Thursday.Peggy Whitson, on the eighth spacewalk of her career, broke the record for cumulative spacewalk time by a woman of 50 hours and 40 minutes held by Sunita Williams. Whitson now has the record of 53 hours and 22 minutes, with plans for another spacewalk next month. During the spacewalk, Whitson and Shane Kimbrough connected cables for a docking adapter recently moved to another location on the station and installed a computer relay box. During the spacewalk, astronauts lost part of a cover they were installing on the port where the docking adapter was previously located, but replaced it with a thermal cover from the adapter. [CBS]
The chief executive of Thuraya has left the company to take a job with another satellite company in the United States. Samer Halawi said he left Dubai-based Thuraya in February and is moving to the U.S. to join an unidentified company in the satellite sector. Ahmed Al Shamsi, the chief technology officer of Thuraya, will take over as acting CEO, the company announced Thursday. [SpaceNews]
The team working on a proposed lander mission to Europa will continue their effort despite plans by the White House not to fund the mission. The administration’s fiscal year 2018 budget request said it was providing no funding for the Europa lander mission, while supporting the Europa Clipper mission to perform multiple flybys of the icy Jovian moon. At a meeting this week, a JPL manager said they have funding to continue work on the lander mission this year, including a mission concept review planned for June, as Congress takes up the proposed budget. The lander, which would launch no earlier than late 2025, is designed to look for evidence of life on the potentially habitable moon. [SpaceNews]
Experts warned Congress this week that the GPS system is susceptible to disruption. At a joint hearing of House armed services and homeland security subcommittees, witnesses said that jamming is a major concern for the GPS system, and more is needed to restrict access to GPS jamming and spoofing devices. Retired Gen. William Shelton, the former head of Air Force Space Command, said a decade of efforts since China’s 2007 anti-satellite test highlighted the need to counter broader space threats has resulted in little “but a pile of studies.” [SpaceNews]
The Space Foundation has hired a new chief executive. The organization announced Thursday that Thomas E. “Tom” Zelibor, a retired U.S. Navy rear admiral, will start as its new CEO April 30. He was previously chairman and CEO of Lightwave Logic Inc., a communications technology company. The hiring, made after a five-month national search, comes just before the Space Foundation holds its flagship event, the 33rd Space Symposium, next week. [Space Foundation]
A company planning a terrestrial in-flight broadband network to compete with satellite systems has raised a major funding round. SmartSky said Thursday it raised a $170 million Series B round, which is in addition to $66.7 million it raised last month and $12.1 million in 2015. The company is developing a network of towers to provide broadband connectivity to aircraft in North America, competing against systems that provide access via satellites. SmartSky says it plans to focus initially on the business aviation market before moving into the commercial airliner sector. [SpaceNews]
A NASA spacecraft has confirmed that Mars once had a thick atmosphere that was lost to space.Scientists used data on the ratio of isotopes of argon in the Martian atmosphere, collected by the MAVEN spacecraft, to determine how much argon was lost to space over time. Extending that result to other gases in the atmosphere led scientists to conclude that Mars, early in its history, had an atmosphere as dense as the Earth’s today, rich in carbon dioxide. That atmosphere could have kept the planet warm and allowed the presence of liquid water on its surface. [Space.com]
Note: FIRST UP will be publishing next week from the 33rd Space Symposium in Colorado Springs. For those signed up for e-mails, we’ll have all the updates from the conference, arriving in your mailbox a little bit later in the morning than usual. And, if you’re at the symposium, please pick up a copy of the SpaceNews show dailies on Tuesday, Wednesday and Thursday.
﻿
Thuraya CTO takes reins as longtime CEO departs for U.S. company
Europa lander work continues despite budget uncertainty