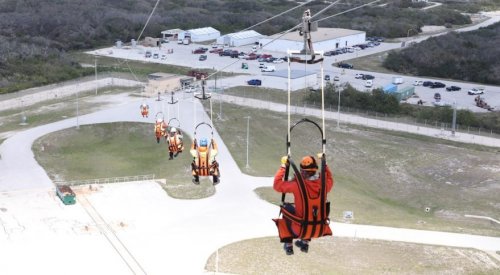 ROYAL GORGE, Colo. — The same system used by thrill-seeking tourists could also one day save the lives of astronauts flying on a commercial crew vehicle.
Boeing and United Launch Alliance announced April 2 that they had completed testing of the Emergency Egress System (EES) for the new crew access tower at Cape Canaveral’s Space Launch Complex 41, which will host Atlas 5 launches of Boeing’s CST-100 Starliner commercial crew vehicle starting next year. 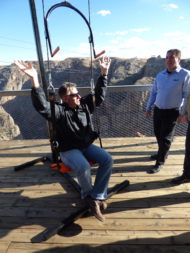 The EES uses a version of a commercially available zipline, similar to those used in mountain resorts and parks, to carry astronauts and ground crews away from the pad in the event of an emergency during launch preparations. The system takes people from the top of the pad, 52 meters high, to a point on the ground more than 400 meters away in 30 seconds.
Gary Wentz, vice president of human and commercial systems at ULA, said at media event here the day before the 33rd Space Symposium in Colorado Springs that ULA selected the zipline system over alternatives ranging from gondolas to a track-based system like a roller coaster. “This met all of the requirements and is safer,” he said.
Wentz said that ULA went through “multiple trades” that included cost, safety and ease of use before settling on a zipline system developed by Terra-Nova LLC of Park City, Utah. The fact that the system is used commercially played a factor as well, he said. “That was key for us. People are putting their children on this,” he said, pointing to the zipline system in place at Royal Gorge Bridge and Park here, also provided by Terra-Nova.
The space shuttle used a similar “slidewire” system for evacuating crews, but the zipline system developed for Starliner missions has advantages. Among them is that the slidewire system used “baskets” that had to carry several people at a time, while the zipline system uses individual seats that an astronaut, wearing a pressure suit, can easily strap themselves into.
“I think in a lot of ways it’s actually easier that the slidewire system,” said Chris Ferguson, a former astronaut and current director of Starliner crew and mission systems at Boeing, citing the challenges of loading the shuttle-era slidewire baskets.
The EES at the launch pad will have 20 seats, enough to accommodate both the Starliner crews and any ground personnel still at the pad. It would be used if there was a problem with the Atlas during the final minutes before launch, Wentz said, such as pressure instabilities in the rocket’s propellant tanks or short circuits in electrical systems tied to the rocket’s propulsion system.
Eric Cylvick, manager Terra-Nova, said his company was contacted by ULA about its zipline system in late 2015, and soon thereafter received a contract to develop it. His company specializes in niche applications that require unique technology, like the braking system used in this system.
Terra-Nova, he said, has worked on much bigger systems, including one spanning a canyon in Mexico that runs for more than 2,500 meters. “It’s one of our smaller contracts,” he said of the EES zipline project.
﻿
Space Foundation has a new CEO
Eutelsat satellite returned to factory as French Guiana unrest continues