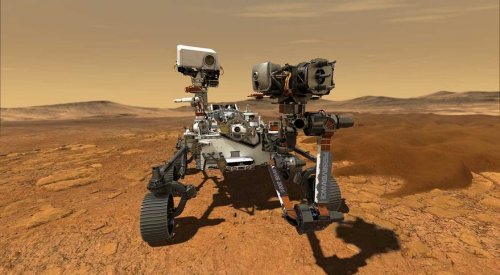 WASHINGTON — Cost overruns on a major rover mission and proposals for both sample return missions and a new orbiter are straining NASA’s Mars exploration program and threatening the future of two ongoing missions.
In a series of recent town hall and advisory committee meetings, NASA officials laid out their plans for current and proposed missions while facing questions from scientists about proposals in the agency’s fiscal year 2021 budget request that could effectively end the Mars Odyssey orbiter mission and curtail operations of the Curiosity rover.
The centerpiece of NASA’s Mars exploration plans is Mars 2020, which will launch a rover recently named Perseverance to Mars. That rover will cache samples for return to Earth by a pair of future missions currently scheduled for launch in 2026, in cooperation with the European Space Agency.
Preparations for the Mars 2020 launch, scheduled for July 17, remain on track despite disruptions to agency activities caused by the coronavirus pandemic. In a virtual town hall meeting March 19, Lori Glaze, director of NASA’s planetary science division, emphasized that the mission was one of just a few missions given the “very highest priority” because of its narrow launch window.
“We’re going to ensure that we meet that launch window in July,” she said, while making sure that personnel working on the mission are kept healthy. “As of right now, and even if we go to a next stage of alert, Mars 2020 is moving forward on schedule and everything is, so far, very well on track.”
Mars 2020 previously suffered technical problems that caused cost increases. NASA’s fiscal year 2021 budget proposal estimated the cost to develop the mission at nearly $2.04 billion, an increase of 21.4% from the baseline cost estimate made in 2017. Problems with one of the instruments on the rover as well as its sample caching system contributed to the overruns.
“The FY20 budget appropriation, though very favorable for us, was significantly overstressed supporting some problem resolution that we had in multiple areas on the 2020 mission,” Jim Watzin, director of NASA’s Mars exploration program, said at a March 9 meeting of NASA’s planetary science advisory committee.
Watzin said while those problems had been resolved, those cost overruns required

“austerity across the portfolio” of Mars programs, with the exception of research and analysis. “Every other element of the program was tapped to support the problem resolution” with Mars 2020, he said.
NASA hasn’t disclosed specific cuts to other Mars programs, and a fiscal year 2020 operating plan, where NASA details spending for specific programs not specifically allocated in the appropriations bill, is still pending approval by Congress, Glaze said in the March 19 town hall.
Watzin said one change is to end NASA support for ESA’s Mars Express orbiter mission, on which NASA spent $2.8 million in fiscal year 2019. He said that mission did poorly in a recent senior review of extended missions, hence the decision to wind down support by the summer.
Other ongoing missions are threatened by the administration’s fiscal year 2021 budget proposal. “The FY21 budget that the president just recently submitted overall is extremely favorable for the Mars program, but available funding for extended mission longevity is limited,” Watzin said.
That request would effectively end operations of the Mars Odyssey orbiter, launched in 2001, and reduce the budget for Curiosity from $51.1 million in 2019 to $40 million in 2021, with no funding projected for that rover mission beyond 2021.
“We had some very difficult decisions to make to balance the budget within the constraints that we had, and this is the outcome of that,” Watzin said.
Those reductions come as NASA proposes to start new missions. The fiscal year 2021 budget request includes $232.6 million for “Mars Future Missions.” Much of that funding would go to initial work on two missions that will collect and return samples cached by the Perseverance rover. A lander mission, led by NASA, would touch down near the Mars 2020 landing site and deploy an ESA-developed rover to collect those samples, placing them into a Mars Ascent Vehicle that is launched into orbit. An ESA-led orbiter, with a NASA sample collection payload, would capture the sample in Mars orbit and return it to Earth. Both missions are slated for launch in 2026, returning the samples in 2031.
That funding line also supports initial work on a new orbiter mission concept, Mars Ice Mapper. The orbiter, jointly developed with the Canadian Space Agency, would carry an instrument to map subsurface ice deposits to a depth of about 10 meters in the mid-latitude regions of Mars. “The mid-latitudes are the focus because that’s potential landing site arenas for future exploration missions,” Watzin said, including human missions.
In addition to that science instrument, Mars Ice Mapper, proposed for a 2026 launch, would carry a communications payload to support future missions. “The primary objective for us is to increase our communications infrastructure at Mars,” Glaze said at a March 12 meeting of the NASA Advisory Council’s science committee.
The addition of Mars Ice Mapper, a mission concept not widely discussed prior to the release of the budget proposal, took many scientists by surprise. The mission, they noted, doesn’t fit into previous plans, including those laid out in the planetary science decadal survey.
“Some people said, ‘Wait, that’s not in the decadal,’” said Thomas Zurbuchen, NASA associate administrator for science, of Mars Ice Mapper at the March 12 science committee meeting. “I like to tell people that not every mission we’re doing is in the decadal, especially small missions.”
He argued that the mission was intended to respond to a recommendation in a midterm review of the most recent decadal survey to maintain a “robust communications infrastructure” at Mars. Including the Canadian science instrument doesn’t significantly increase the cost of the mission to NASA, he added.
Glaze was asked about the proposed cuts to Mars Odyssey and Curiosity at the March 19 town hall meeting, which took the place of the “NASA night” in-person event at the Lunar and Planetary Science Conference scheduled for the week of March 16 but cancelled because of the coronavirus pandemic. She emphasized that the fiscal year 2021 budget proposal was just that: a proposal.
“Please keep in mind those are proposed budgets,” she said, noting that both Mars Odyssey and Curiosity got high scores in the senior review. “They’ve done very well, and certainly we have the desire to keep them going as long as possible.”
﻿
Coronavirus pauses work on JWST
DoD memo: Suppliers of critical products and services must stay on the job during pandemic