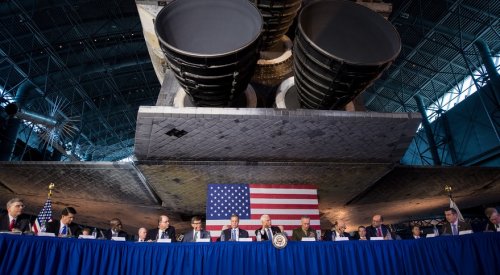 WASHINGTON — The next meeting of the National Space Council, already scaled back because of the coronavirus pandemic, has been postponed, the White House announced March 21.
In a brief statement, the White House said that the March 24 meeting of the council, chaired by Vice President Mike Pence, had been postponed to a date yet to be determined.
The statement did not give a reason for the postponement, including whether it was caused by the pandemic. The White House had already made changes to the event, moving it from NASA’s Glenn Research Center to the Eisenhower Executive Office Building in Washington. That made it unlikely that the meeting, unlike past ones by the council, would have a large audience.
In a March 13 statement announcing the move, the White House said the event was going to be livestreamed, but did not provide additional details, such as an agenda, for the event before announcing it was postponed.
“The National Space Council and its members continue to work diligently to advance America’s goals in space and to build on our legacy as the world’s leading spacefaring nation,” Scott Pace, executive secretary of the National Space Council, said in the statement. “The Council’s daily work across civil, national security and commercial space sectors continues, and we will convene a full meeting of the Council at a later date.”
Pence, who has chaired every meeting of the council since it was reconstituted in 2017, has in recent weeks taken a leading role in the federal government’s response to the coronavirus pandemic, participating and sometimes leading what has become a daily series of White House briefings.
Pence said at a March 21 briefing that both he and his wife would be tested for the coronavirus disease COVID-19 after a member of his staff tested positive the day before. Pence said that he had no direct contact with that individual and had no reason to believe he was exposed to the virus, but that “given the unique position that I have as vice president and as leader of the White House coronavirus task force, both I and my wife will be tested for the coronavirus later this afternoon.”
Although the White House had not released the agenda for the now-postponed meeting, several topics were likely to have been discussed. Mir Sadat, a former National Security Council staff member, said at the Satellite 2020 conference March 9 he expected the council to discuss a new policy on cybersecurity for space systems.
Some in the space industry also expected NASA to use the event to provide updates about its Artemis program to return humans to the moon, and perhaps announce which companies it selected for Human Landing System contracts to begin studies of lunar landers for Artemis. Agency officials previously stated that NASA would likely pick several companies for initial nine-month studies, downselecting to one or two companies to pursue full-scale lander development through public private partnerships.
In its most recent procurement filing for the program in February, NASA said it expected to make awards in either late March or early April.
The National Space Council’s Users’ Advisory Group had been scheduled to meet in person March 30 in Colorado Springs, coinciding with the 36th Space Symposium that was to begin that day. However, that conference has been postponed because of the pandemic, and a new date has not been announced for the advisory group meeting.
﻿
Students integrate cubesat before coronavirus shuts school
“Overstressed” NASA Mars exploration budget threatens missions