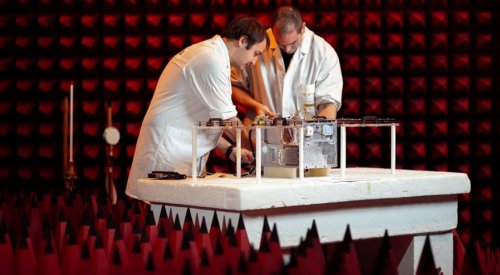 WASHINGTON — French space and defense company Hemeria is taking steps to quickly scale beyond cubesats and find a niche building slightly larger classes of small satellites.
The Toulouse- and Angouleme-based company has long supplied subsystems for satellites, including the O3b and Iridium Next constellations, but moved into complete satellite manufacturing in 2017 with the help of the French space agency CNES.
Hemeria and CNES built the 12-unit ANGELS cubesat, which launched as a rideshare last December on an Arianespace Soyuz mission. Two months later, Hemeria signed a contract with Kinéis to build 25 microsatellites for a smallsat constellation to provide global connectivity for sensors and other devices.
The Kinéis satellites will use a Hemeria microsatellite platform slightly larger than a 16-unit cubesat, Hemeria chief executive Nicolas Multan said, providing the company with experience building satellites intended to differentiate Hemeria from cubesat builders like GomSpace and AAC Clyde Space.
When it comes to building cubesats, “nobody has recurring business,” Multan said in an interview. “It is only a business of opportunity. We don’t want to go to this market. We prefer to be in the middle of the nanosat and microsat business.”
A standard cubesat unit measures 10 centimeters on each side, and can be stacked with other units to form larger, more capable spacecraft. But sometimes cubesats are too limiting. Kinéis President Alexandre Tisserant said by email that the company was considering a 16-unit cubesat design, but scaled up beyond the cubesat form factor to accommodate larger antennas, star trackers and solar panels.
Multan said Hemeria is developing a suite of platforms for satellites between 20 and 65 kilograms, including a small geostationary bus. A generic low-Earth-orbit bus for telecommunications satellites should be ready for sale in 2021, he said, followed by a platform for Earth observation and science missions in 2022.
Hemeria’s take on a small geostationary telecom satellite platform weighing 40 kilograms fully fueled is also in the works, though Multan declined to say when it would be ready. Satellite telecommunications companies are influencing the design, he said, which is significantly smaller than other “small GEO” platforms from Astranis, Maxar Technologies and other companies.
Hemeria is expanding its space offerings after spinning off from Nexeya in 2019. The French government required Nexeya to divest certain space and defense activities when German defense company Hensoldt moved to acquire it last year, Multan said, resulting in the formation of Hemeria.
Hemeria generated 35 million euros ($40.8 million), split equally between space and defense for the 12 months ended June 30, and had a workforce of around 200 people, according to a company presentation. Multan said Hemeria expects to generate 45 million euros in its next fiscal year, thanks to growth in space, and new defense business from its summer acquisition of Éolane Les Ulis, an operational maintenance company. Hemeria now numbers 240 people, with 140 dedicated to space, he said.
Hemeria is building two small satellites for the French Armed Forces Ministry that will launch to geostationary orbit in 2023 to monitor the space environment there, Multan said. The rocket will be European but has not been selected, he said. French Armed Forces Minister Florence Parly, who has pushed for more investment in French military space projects, called for the GEO monitoring satellites, he said.
Multan said Hemeria is mainly focused on French government space programs, but will eventually seek to export satellites for international customers. Most of the company’s current international space business involves supplying subsystems to Airbus, Thales Alenia Space, and other companies, he said.
﻿
Roper: Space Force could save money and time with digitally-designed satellites
U.S. military to test Isotropic Systems antennas with SES satellites