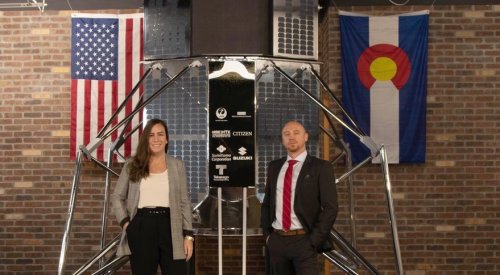 WASHINGTON — A Japanese company developing commercial lunar landers has opened an office in the United States in a bid to win more business from NASA’s Artemis program.
Tokyo-based ispace announced Nov. 9 it opened an office in Denver that it will use to design lunar landers. The company is already working on two commercial landers, and is part of a team led by Draper that is one of 14 companies in NASA’s Commercial Lunar Payload Services (CLPS) program.
Opening the U.S. office, ispace executives said in interviews, is intended to help the company win NASA contracts. “The U.S. is a very important market,” said Takeshi Hakamada, chief executive of ispace. “We are always looking for an opportunity to serve NASA and the U.S. government.”
“We wanted to be closer to the customer, closer to the North American market, and hire U.S. engineers who better understand the needs of NASA,” said Kyle Acierno, chief executive of ispace’s U.S. operations. “All of those things put us in a better position to be successful in the future.”
The company is working on two landers, called Mission 1 and 2, scheduled for launch in 2022 and 2023. Those landers can each carry about 30 kilograms of payload. That makes them undersized for most CLPS missions, Acierno said, noting that recent competitions had all required landers to carry significantly larger payloads.
The new U.S. office will be charged with designing a larger version of the lander for later missions. Acierno said the company hasn’t determined how much payload the new design will be able to carry beyond being “substantially larger” than ispace’s existing design.
The company has hired its first person for the office: Kursten O’Neill, a former SpaceX engineer who will be the company’s U.S. lander program director. Acierno expects to have “tens” of employees there by early next year. That office will focus on the design of the lander, but have General Atomics, another partner on the Draper-led CLPS team, handle assembly, integration and testing of the lander.
Hakamada said ispace will continue to develop its initial, smaller lander in Japan and offer it to other customers. “We believe having the two landers is important to answer customers’ various demands,” he said. “Smaller landers can offer more customized missions.”
The company is pressing ahead with development of its landers thanks to a $28 million Series B funding round it raised in August, bringing its total raised to date to $125 million. Design of the Mission 1 lander is wrapping up and the spacecraft will enter assembly, integration and testing next year, in partnership with ArianeGroup.
Hakamada said ispace also sees potential interest in its lunar landers from the Japanese government as part of its role in the Artemis program. “They are interested in increasing its space budget, so there will be more opportunities for the lunar program,” he said.
The company chose the Denver area for its U.S. office over locations in California, Florida, Texas and Washington. “Our goal was to hire rapidly, and Denver just has this ecosystem that already exists with a large pool of engineering talent that we could pull from,” Acierno said, also citing cost advantages.
That talent pool includes people at other companies working on lunar landers, such as Deep Space Systems, Lockheed Martin and Sierra Nevada Corporation, all of which are part of the CLPS program; Lockheed is also a member of the Blue Origin-led “National Team” developing a crewed lander for NASA’s Human Landing System program. “Denver is going to be the capital of lunar landers in the United States,” Acierno said.
﻿
Large launch companies cast doubt on viability of small launch vehicle market
APT Satellite orders new small HTS satellite from China’s CGWIC