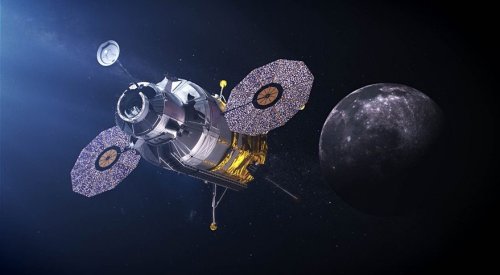 WASHINGTON — A Senate appropriations bill would provide NASA with only a small fraction of the funding it requested for lunar lander development, putting any chance of returning humans to the moon by 2024 in jeopardy.
Senate appropriators released a set of fiscal year 2021 spending bills Nov. 10, including the commerce, justice and science (CJS) bill that funds NASA. Appropriators do not plan to mark up the bills, but instead use them as the basis of negotiations over the next month with the House, which passed its spending bills in the summer.
The Senate CJS spending bill offers $23.495 billion for NASA, $866 million more than the House bill but $1.75 billion below the administration’s request for fiscal year 2021.
“In a fiscal environment that is extremely challenging, the Committee must weigh and prioritize funding across all of NASA’s activities, as well as important priorities throughout the bill,” Senate appropriators wrote in a report accompanying the bill. “However, the shortfalls of NASA’s fiscal year 2021 budget proposal make it impossible to fully fund all of NASA’s proposed activities.”
One major area that comes up short is NASA’s Human Landing System (HLS) program. NASA sought $3.2 billion for HLS to support developed of one or more crewed lunar landers as part of the Artemis program. The Senate bill, though, reserves $1 billion for the effort, more than the approximately $600 million in the House bill but far short of the agency’s request.
“While the Committee supports the mission of returning U.S. astronauts to the surface of the Moon, the lander element represents the largest remaining cost, schedule, and technical risk, and has yet to be selected,” appropriators stated. “This uncertainty makes it difficult to analyze the future impacts that funding the accelerated Moon mission will have on NASA’s other important missions, not to mention the programs, projects, and activities funded elsewhere in the bill.”
The report added it was providing funding “to allow for NASA to advance its human exploration program, including the development of landers, and awaits further definition of the program and a refined cost estimate.”
However, NASA leaders have stated that they needed the full $3.2 billion requested to maintain a schedule for a 2024 lunar landing. “Accelerating it to 2024 requires a $3.2 billion budget for 2021 for the Human Landing System, which is in the president’s budget request,” NASA Administrator Jim Bridenstine told Senate appropriators at a Sept. 23 hearing on the agency’s budget request.
“It is critically important that we get that $3.2 billion,” he stated two days earlier during a briefing about a NASA report outlining its plans for the Artemis program, including the projected $28 billion cost of its first phase, which culminated in the 2024 landing. That cost estimate included neatly $16.2 billion for HLS alone.
However, there was skepticism among members of Congress about the wisdom of pursuing a 2024 landing. During so “would require an enormous amount of resources,” Sen. Maria Cantwell (D-Wash.), ranking member of the Senate Commerce Committee, noted in an Oct. 7 speech, suggesting that the agency “set an accurate timeframe for what it will really take us to return to the moon.”
It also appears unlikely that an incoming Biden administration would pursue a 2024 landing. The campaign said little about space beyond a passage in the party platform that endorsed human space exploration plans, but did not set any dates.
Bridenstine, speaking Nov. 10 at a meeting of the Global Spaceport Alliance, an organization of current and prospective commercial launch sites, did not directly address the shortfall in HLS funding in the Senate bill, instead thanking the Senate for introducing a bill that provides NASA with its highest funding ever in “nominal dollars,” or levels not corrected for inflation. When adjusted for funding, the 2021 bill is still far less than the agency’s funding at the peak of the Apollo program in the 1960s.
“We’re in some pretty challenging times” from an overall fiscal perspective, he said, praising the “bipartisan, apolitical” support NASA received from Congress. “We’re seeing a commitment, in a bipartisan way, on both sides of the aisle, that is going to make us successful for the long run.”
Restoring science and other program
The bill provides nearly $1 billion more than the administration’s request for NASA science program. That comes from restoring funding for several science missions, such as the Roman Space Telescope and the PACE and CLARREO Pathfinder Earth science missions. The report also rejected a proposal to cancel the SOFIA airborne observatory, but rather than set a specific funding level, directed NASA to use funding for missions not flown in fiscal year 2020 because of the pandemic for 2021.
In addition, the bill restores funding for NASA’s science, technology, engineering and mathematics (STEM) engagement, or education, program. The Senate bill follows the lead of the House, whose bill also restored funding for STEM engagement as well as the science missions targeted for cancellation.
Appropriators expressed frustration with NASA’s approach to seeking to cancel missions with the expectation that Congress will restore their funding. They noted in the report that NASA selected a launch for PACE just days before the release of the budget proposal in February that sought to cancel the mission. The agency also gave the Roman Space Telescope, formerly known as WFIRST, its new name in a ceremony in May, three months after the budget came out.
“Going forward,” the report stated, “NASA should refrain from requesting only part of the funding it requires to accomplish all of its missions.”
﻿
“Revolutionary change” expected from new Indian space policy
NASA certifies SpaceX Crew Dragon spacecraft ahead of Crew-1 launch