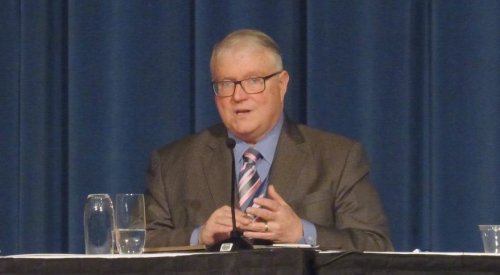 WASHINGTON — The Commerce Department will be able to accelerate it work on space traffic management after Congress provided the agency with most, but not all, the funding it requested for that effort.
The fiscal year 2021 omnibus spend bill, released Dec. 21 and approved by the House and Senate later that day, will provide $10 million for the Office of Space Commerce in 2021. That bill also merges the office with the Commercial Remote Sensing Regulatory Affairs (CRSRA) office, which regulates commercial remote sensing satellites. The combined office will remain within the National Oceanic and Atmospheric Administration.
The report accompanying the bill directs the office to use the funding for a space traffic management (STM) “pilot program” working with other agencies and industries. That program will “develop STM technical prototypes, initiate an open architecture data repository, and perform STM demonstrations and experiments.”
The Commerce Department requested $15 million for the combined Office of Space Commerce and CRSRA in its fiscal year 2021 budget proposal, primarily to support its planned work on STM. Each office received $1.8 million in 2020, with an additional $500,000 to the Office of Space Commerce to fund a study on which agency is best suited for civil STM work.
That study, performed by the National Academy of Public Administration (NAPA) and released in August, concluded that the Commerce Department was the best agency to handle civil STM, beating out the Defense Department, NASA and the Federal Aviation Administration.
The House kept both the Office of Space Commerce and CRSRA separate, and at their 2020 levels, in its fiscal year 2021 appropriations bill passed in July, noting that the NAPA study was not yet complete. A Senate bill introduced in November offered $11.8 million for the Office of Space Commerce, combining it with CRSRA.
The department and its advocates used the NAPA report to make its case for full funding of its budget proposal. “We’ve been meeting routinely now with congressional staff and some congressional members to explain why this is so important,” said Kevin O’Connell, director of the Office of Space Commerce, during a SpaceNews webinar on STM in October. “We’re making the case as strongly as we can, not just from the office but from the secretary as well.”
The Commerce Department has been moving ahead on STM with the limited funding it had. It held a virtual industry day in November to discuss its plans, including the creation of an “open architecture data repository” that will combine space situational awareness data from multiple sources. Commerce has also been finalizing a memorandum of understanding with the Defense Department outlining how to transfer civil STM responsibilities to Commerce.
O’Connell said in October that, if the office did get the funding it requested, 2021 would be a “building block” year for its STM efforts. That includes work on the open architecture data repository as well as hiring a “modest amount” of new staff. By the end of 2021, he predicted, “we will have an initial architecture that is up and running.”
﻿
China launches first Long March 8 from Wenchang spaceport
The more things change: Ansys acquisition isn’t likely to alter AGI or Comspoc