If the political, technical and budgetary stars align for NASA and its partners in coming years, the moon could be the go-to place as the century unfolds. Astronauts would again explore Earth’s celestial next-door neighbor, perhaps setting in motion future mining endeavors to extract ices likely lurking in sunlight-shy craters for processing into water, oxygen, and rocket propellant. Humans that “settle in” on the moon could well be a future prospect. 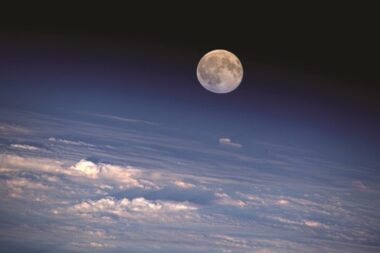 Earth’s moon is a dusty denizen of deep space. View from the International Space Station. Credit: NASA/Jeff Williams
The next chapter in the U.S. human exploration of the moon, the Artemis Project, will dispatch crews there for extended periods of time, building upon Apollo’s heritage. Between 1969 and the end of 1972, a dozen astronauts kicked up the powdery regolith, the topside dirt of the moon. But there’s one flash back message from the Apollo moonwalkers worth heeding: the place is a Disneyland of dust.
During their landings, dust blown up into the thin lunar atmosphere impacted astronaut visibility. Once crews were out and about on the moon, the dust had deleterious effects on their spacesuits, helmets, equipment and instrumentation. Apollo expedition members could not escape tracking lunar material inside their lunar landers. After doffing their helmets and gloves, moonwalkers could feel the abrasive nature of the dust, even experiencing an “Apollo aroma” — a distinctive, odoriferous smell.
As explained by Apollo 17’s moon landing crew:
“I think dust is probably one of our greatest inhibitors to a nominal operation on the moon. I think that we can overcome other physiological or physical or mechanical problems except dust,” said mission commander Eugene Cernan. “One of the most aggravating, restricting facets of lunar surface exploration is the dust and its adherence to everything no matter what kind of material, whether it be skin, suit material, metal, no matter what it be and its restrictive friction-like action to everything it gets on,” said lunar module pilot and geologist, Harrison Schmitt.
AGENCY, INDUSTRY CONCERN
Study groups and technologists are assessing ways to lessen the negative impact of lunar dust on the astronauts, their equipment, and surface operations. 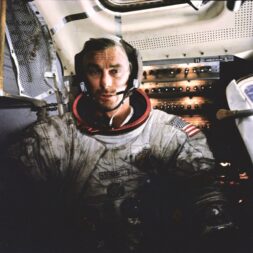 Apollo 17 commander Eugene Cernan prepares to doff dust-covered moonwalking spacesuit. Credit: NASA
Joel Levine, a research professor in applied science at The College of William and Mary in Williamsburg, Virginia, was convener and chair of a NASA workshop on lunar dust and its impact on human exploration. The message from that workshop held in February was clear. “Prior to the first Artemis human landing on the moon, we must better understand the particle size distribution, structure, chemical composition, potential toxicity, magnetic and electrical properties and the dynamics and distribution of lunar dust,” he said.
The workshop findings were published Sept. 24 as a NASA Engineering and Safety Center Technical Assessment Report, stating that the dust problem “is an agency and industry concern affecting most mission subsystems and it must be addressed.” The report also said that it is crucial that measurements and experiments be taken and carried out on the lunar surface by precursor landers to find out dust characteristics “that will influence hardware design, and provide toxicology data to safeguard crew health.”
PROTECTING LUNAR GEAR
Future machinery on the moon will be presented challenges, said Gerald Sanders, an expert on in-situ resource utilization (ISRU) for NASA’s Space Technology Mission Directorate at Johnson Space Center in Houston. Unlike other equipment and instruments that operate on the moon, ISRU systems and hardware need to operate continuously and in direct contact with lunar regolith and dust for very long periods of time. It is vital, he said, to develop techniques and technologies to resist abrasion, to safeguard optical coatings, as well as protect rotating mechanisms. In the end, easily replaceable components in lunar-situated gear will be critical. 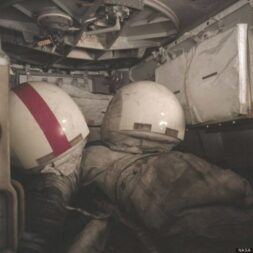 Apollo 17 helmets and dusty spacesuits stuffed inside a lunar lander following the last human treks on the moon in December 1972. Credit: NASA
“While the Apollo missions and samples returned to Earth have provided a wealth of information, it will not be until the VIPER rover enters a permanently shadowed region that we will get a true sense of what the regolith is like to design future ice mining equipment,” Sanders said. NASA’s Volatiles Investigating Polar Exploration Rover, or VIPER, is a mobile robot that will go to the moon’s south pole, perhaps as early as December 2022 under NASA’s Commercial Lunar Payload Services program.
Philip Metzger, a planetary physicist with the Planetary Science faculty at the University of Central Florida, has focused his research on dust transport and its effects due to landing spacecraft on the moon.
“Lunar lander engine exhaust blows dust, soil, gravel, and rocks at high velocity and will damage surrounding hardware such as lunar outposts, mining operations, or historic sites unless the ejecta are properly mitigated,” said Metzger.
Decades of research have developed a consistent picture of the physics of rocket exhaust blowing lunar soil, “but significant gaps exist,” Metzger added. “No currently available modeling method can fully predict the effects. However, the basics are understood well enough to begin designing countermeasures.”
Metzger is principal investigator for the Ejecta Sheet Tracking, Opacity, and Regolith Maturity (STORM) instrument, set to fly on a Masten Space Systems Xodiac vertical takeoff and vertical landing system. The upcoming flight in Mojave, California, will gauge the density and sizes of particles that churn up during terrestrial simulations of lunar landings.
INTEGRATED DUST MITIGATION STRATEGY
NASA wants to place the first woman and next man at the lunar south pole in 2024. That location is advocated as a future base camp given possible access to ice and other mineral resources. However, still unknown are the true physical properties of the lunar dust and regolith in the polar regions. 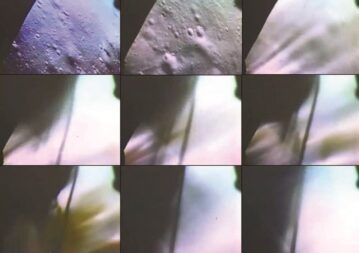 Dust being displaced by engine exhaust from the Apollo 15 mission’s lunar lander, Falcon. Credit: NASA
Jorge Núñez of the Planetary Exploration Group at Johns Hopkins University Applied Physics Laboratory (APL) in Laurel, Maryland, said a host of questions need to be tackled. “We can approximate and extrapolate based on the data we already have, but we will not really know until we land in those regions,” he said.
“As we learned from the Apollo missions, lunar dust can cause a wide range of issues, including being a hazard to astronaut health, sticking to all kinds of surfaces like spacesuits, visors and windows, solar panels, and radiators,” Núñez said. Lunar dust also degrades seals, fabrics, and mechanisms. Dealing with dust is going to require an “integrated dust mitigation strategy,” he added, such as using slow, methodical movements and allow adequate time for dust cleaning protocols, as well as keeping spacesuits outside of the pressurized habitat or lunar rover, to utilizing an electrodynamic dust shield to repel dust off materials.
Núñez said that NASA’s Lunar Surface Innovation Initiative is accelerating the development of many of these dust mitigation technologies that are important for enabling human missions on the surface of the moon.
MOON SIMULANTS
The reactive nature of lunar dust to humans is another area flagged by APL’s Karl Hibbitts, lead facilitator for the ISRU focus group of the Lunar Surface Innovation Consortium. The lunar dust has been known to be troublesome in this area since the Apollo era. The particles are chemically very reactive, he said, thus the potential health concern (although various passivation techniques to make them less reactive are being explored). 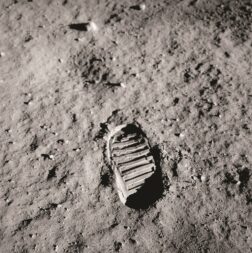 Apollo 11 Lunar Module Pilot Buzz Aldrin’s bootprint. Aldrin photographed this bootprint about an hour into their lunar extra-vehicular activity on July 20, 1969, as part of investigations into the soil mechanics of the lunar surface. This photo would later become synonymous with humankind’s venture into space. Credit; NASA
“We have attempted to study the reactivity of lunar soils in the lab,” Hibbitts said, “but the studies I know of have all been on samples already altered by the Earth’s atmosphere. The new studies on carefully curated lunar soils will hopefully shed some new insights.” Furthermore, as far as “simulants” go — concoctions of made-on-Earth material to imitate the properties of the lunar regolith — one has to choose which properties one needs the simulants to mimic. “It’s not possible to create literally tons of lunar soil, or possibly even a small amount. Facilities are just now learning how to make realistic agglutinates,” he added, and yet to be reproduced is the nanophase metallic iron that’s resident in the moon’s regolith.
“We’re getting better at approximating the shape and size distribution function, but the reactivity could only be mimicked by production in a vacuum chamber and will always be limited to tiny quantities,” Hibbitts told SpaceNews.
So far, human contact with tiny, very sharp, glassy lunar dust particles only occurred briefly during the Apollo missions, said Peter Sim, an emergency medicine specialist in Newport News, Virginia. But in returning to the moon and establishing a long-term presence, lunar dust, in sufficient doses, represents a “toxic threat” to human health, he said.
The respiratory system is particularly susceptible, Sim said, but the eyes, skin, and possibly the gastrointestinal tract and other organs may also be affected. Primary prevention of human exposure to lunar dust “should be our number one goal,” he advised.
He added that NASA’s new Exploration Extravehicular Mobility Unit (xEMU) spacesuit will help keep the dust at bay. It has a group of dust-tolerant features, to prevent inhalation, or contamination of the suit’s life support system. Still, keeping habitats dust-free by minimizing incursions, and using effective atmospheric filtration systems, will be a major challenge. “Monitoring of the dust that is present inside lunar habitats will be crucial, since the hab is the place where astronauts are most likely to be exposed. Because of this, the quantity, size, and potential toxicity of the ‘hab dust’ is of paramount importance,” he said.

SpaceNews contributor Leonard David is the author of “Moon Rush: The New Space Race” published by National Geographic in May 2019.
This article originally appeared in the Dec. 14, 2020 issue of SpaceNews magazine.
﻿
Beyond exits: Entrepreneurs look back on forming and selling space startups
Voyager Space Holdings to acquire majority stake in Nanoracks