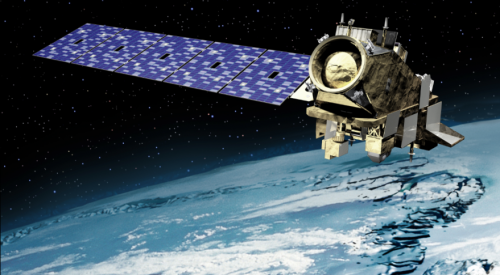 WASHINGTON — While the National Oceanic and Atmospheric Administration received full funding for its ongoing weather satellite programs, the agency is looking at options after a cut to a program for future polar-orbiting weather satellites.
The omnibus spending bill for fiscal year 2017, signed into law May 5, provides NOAA weather satellite programs with $1.979 billion, $84 million less than requested. The bill fully funds the Geostationary Operational Environmental Satellite R (GOES-R) and Joint Polar Satellite System (JPSS) programs for a combined total of $1.54 billion.
“The [fiscal year] ’17 omnibus budget was generally good for NOAA,” Steve Volz, assistant administrator for NOAA Satellite and Information Services, said in a May 3 presentation to the Space Studies Board of the National Academies here.
The program that received the biggest cut, in terms of dollars, was the Polar Follow-On program, which is intended to support work on future JPSS satellites after the first two. The omnibus bill cut $64 million from the program, a 16 percent reduction from the original request for the program. That same program has been targeted for undefined cuts in the Trump administration’s fiscal year 2018 budget blueprint.
Volz said those plans to effectively stretch out the schedule for the third and fourth JPSS satellites present risk issues for NOAA, raising the odds of a data gap should an existing satellite fail. “Our challenge on that one is going to be what does that mean for the risk posture for the observing system,” he said. “We have to quantify the risk of that implementation plan and see if there are ways to mitigate that risk in different ways.”
Volz said in an April interview that NOAA could turn to alternative sources of data, including from commercial and international partners. NOAA just completed the initial series of pilot commercial weather data contracts with two companies, GeoOptics and Spire, for GPS radio occultation data.
Only one of the companies, Spire, launched satellites and collected data by the time the contracts ended at the end of April. “It’s not easy to get to space,” Volz said of GeoOptics’ inability to get its satellites into orbit. “They weren’t able to get their satellites into orbit, so they weren’t able to meet the terms of their contract.”
He chalked that up as a learning experience for what is still an experimental effort to determine both the ability of companies to provide weather data and the usefulness of that data to forecasters. NOAA is now analyzing the data Spire provided, he said.
NOAA also plans to issue another solicitation for commercial weather data. “More resolution, different parameters that we weren’t studying before,” he said of what would change in the next solicitation. “This is a long-term exercise.” The omnibus spending bill provided NOAA with $5 million for that program, the amount the agency requested.
Commercial weather efforts also factored into another cut elsewhere in NOAA. The bill provides the agency with $8.1 million for the Constellation Observing System for Meteorology, Ionosphere and Climate (COSMIC) 2 program, a joint effort of the United States and Taiwan to develop a system to replace the existing COSMIC network of satellites providing GPS radio occultation data. The first set of COSMIC-2 satellites will launch on a Falcon Heavy rocket as part of an Air Force Space Test Program mission.
The report accompanying the appropriations bill prevents NOAA from spending any money on a second set of COSMIC-2 satellites because NOAA has not confirmed launch plans for this second group. The report also requires NOAA to provide Congress with an “analysis of options” within 90 days for collecting the data the second group of COSMIC-2 satellites would provide that “demonstrates that NOAA has thoroughly reviewed potential commercial [radio occultation] sources.”
Planning for a new space weather satellite mission received a boost in the omnibus bill. The Space Weather Follow-On program received $5 million, double the agency’s original request. Volz said that program is starting planning for an initial series of two satellites that will operate at the Earth-Sun L-1 point beginning in 2022 or 2023.
Two small space-related offices within NOAA received steep cuts on a percentage basis. Commercial Remote Sensing Regulatory Affairs, which handles licensing and oversight of commercial remote sensing systems, received $1.2 million, 42 percent less than requested. That cut comes as industry, and even some in Congress, remain concerned about delays in the licensing process because of the office’s heavy workload in recent years.
The Office of Space Commerce received $800,000, 60 percent less than its original request. The office handles interagency coordination for positioning, navigation and timing as well as other promotion of commercial space activities, such as satellite export control reform.
﻿
Inmarsat undecided on how it will use the satellite SpaceX is launching next week
Astronauts set to perform 200th spacewalk in International Space Station history