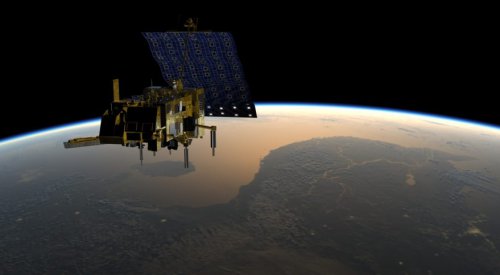 WASHINGTON — Europe’s 30-nation Eumetsat meteorological satellite organization will adjust the orbit of its Metop-A weather satellite to squeeze at least a few additional years of service out of the 10-year-old spacecraft.
The change in orbit will also enable Eumetsat to deorbit the satellite at its end of life — something Metop-A was never originally designed to do, according to Eumetsat’s low Earth orbit spacecraft operation manager Andrew Monham.
Eumetsat officials agreed during a Dec. 6 to 7 council meeting in Darmstadt, Germany, that shifting Metop-A into a drifting orbit in June 2017 would save enough fuel to add two to three years of usable life while preserving enough fuel to dispose of the satellite rather than letting it turn into space junk.
Metop-A launched into low Earth orbit in October 2006, followed by Metop-B in September 2012. Metop-C, the third and final satellite in the series, is scheduled to launch in October 2018 on an Arianespace Soyuz rocket. Following in-orbit commissioning, Metop-C is projected to enter service in 2019. By modifying Metop-A’s orbit, Eumetsat hopes the satellite will overlap with Metop-C for a couple of years. If it does, Metop-A will have effectively tripled its five-year design life.
As a consequence of the orbit change, the local time at which the satellite regularly crosses the equator will gradually shift by two hours from June 2017 to 2021. Metop-A currently circles the Earth in a sun-synchronous orbit, crossing the equator at 9:30 a.m. local time. Monham told SpaceNews Dec. 13 that this is considered to be a mid-morning orbit. The drifting orbit, though, will shift the satellite’s daytime equatorial pass to 7:30 a.m local time by 2021, what the UN’s World Meteorological Organization considers an early morning orbit.
Eumetsat said in a Dec. 8 statement that Metop-A will be directed into a lower perigee orbit that will help ensure it reenters the atmosphere within 25 years of ending service. Monham said the orbit change and disposal plan is possible because Metop-A has made very few correctional maneuvers since launch, leaving it with surplus fuel to use creatively.
“We’ve completely looked at operating the satellite out of it’s design envelop,” he said. “It’s not designed to operate outside of this nominal local time. The solar arrays will no longer be angled correctly with respect to the sun as the orbital plane starts to precess. The power and also the thermal behavior of the satellite will significantly change with time.”
Leaving normal orbital parameters comes as a trade-off, but one that could bring opportunities for new science, Monham said.
“It does open up some possibilities for meteorologist because it’s quite interesting to get measurements from a different local time. The solar illumination is different for that satellite, which means there will be different thermal conditions in the atmosphere and different humidity,” he said.
Monham said Eumetsat enlisted the European Space Agency and the satellite’s prime contractor Airbus Defence and Space to asses how far Metop-A could go outside of its design envelope. ESA and Airbus confirmed the drift orbit was possible, he said.
“We basically worked out that we can operate the satellite until the thermal conditions become such that there is a possibility if the payload gets switched off due to an anomaly that the hydrazine on board might freeze. That is our limiting factor for the satellite operation, and what’s causing us to say we can get to 2021, possibly 2022,” he said.
Monham said additional analysis will be necessary once Metop-A is in its new orbit to determine how long the satellite can last before deorbiting. About half of the satellite’s remaining fuel will be needed for the deorbiting procedure, he said, which involves angling Metop-A into an elliptical orbit for an uncontrolled reentry. Eumetsat will exhaust all remaining fuel and battery power before Earth’s atmosphere does the undertaking.
“If Metop were to be left in its operational orbit at end of life without such an altitude reduction maneuver, the reentry time would be close to 200 years and the risk of collision with other space objects would be unacceptably high,” Monham added.
The first generation of Metop satellites were intended to operate sequentially, but Monham said meteorologists found value in having data from multiple spacecraft at the same time. The second generation of Metop satellites, designated Metop-SG A and Metop-SG B, are scheduled to launch  2021 and 2022, respectively, and will intentionally overlap.
Airbus Defence and Space is building these spacecraft as well. Monham said the two satellites underwent a late redesign to include larger propellant tanks so that they will have enough fuel for a controlled deorbit when they are retired from service.
During its December council meeting, Eumetsat also approved a contract for the payload data acquisition and processing function of the ground segment for the Metop-SG satellites. Thales Alenia Space, in a Dec. 14 press release, said Eumetsat selected the company to lead a European consortium that will create what is essentially expected to be a new-generation data processing center, capable of extracting both geophysical and environmental products in near-real time. Eumetsat said the ground segment contract approval paves the way for all ground segment development contracts to “be in force by the end of the year.”
﻿
Missile defense tracking systems need to move to orbit, leaders say
Vector Space Systems wins approval for Tucson rocket factory