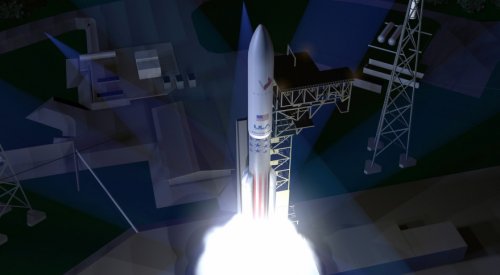 WASHINGTON – Whichever engine is not selected by United Launch Alliance to power the Vulcan rocket could lose its Air Force funding, although top acquisition officials declined to say Wednesday whether they would definitely take that action.
“Once ULA makes their decision, that’s a choice that ULA makes, I’m interested in the launch service capability,” said Maj. Gen. Roger Teague, the director of space programs in the Office of the Assistant Secretary for Acquisition.
Speaking to reporters at the Pentagon, Teague declined to say whether the Air Force would cancel funding for the development of whichever engine ULA does not select, but said that the service is focused on launch services rather than engine development.
“I’m not going to continue to fund a separate engine that may not be used as part of our overall assured access requirement,” Teague said.
The Air Force in March 2016 awarded more than $160 million in cost-sharing contracts to Aerojet Rocketdyne and a ULA-Blue Origin partnership for development of competing main-stage rocket engines. Aerojet received $115 million to help fund development of its AR1 kerosene-fueled engine while ULA received $46.6 million to help fund development of Blue Origin’s BE-4 methane-fueled engine,
ULA Chief Executive Tory Bruno told SpaceNews in April that Vulcan will use Blue Origin’s engine provided it performs as expected on the test stand. Blue Origin on May 13 suffered a setback in the development of its BE-4 engine, losing a key hardware component of the engine. The company said its “hardware rich” posture would allow it to return to testing soon.
A week or so before Blue Origin’s setback, Aerojet Rocketdyne announced that it recently completed a series of hot-fire tests to validate the AR1’s pre-burner design. The following week, the AR1 passed its critical design review, a key milestone the veteran propulsion house says keeps the engine on track for a 2019 certification to launch national security payloads.
Teague said that the Air Force wants to “preserve and continue, as long as we’re able, the investments we have in those companies that are providing engines, to allow the full range and understanding of the baseline capabilities as those programs are being tested, for as long as possible.”
That allows “full insight in terms of the capability that might be there, to make sure that ultimately our assured access needs are met,” he said. “That’s what this is about. It’s not about necessarily sustaining a particular vendor for a long period of time.”
Jim Simpson, Aerojet’s senior vice president of business development and strategy, said he expects the U.S. government to continue funding the public-private partnerships until it is comfortable with the risk of relying on only one engine going forward.
“As General [Jay] Raymond [head of Air Force Space Command] noted last week, having multiple engines being developed adds credibility to the Air Force strategy and lowers their risk posture going forward,” Simpson said. “We are working with the Air Force on the next stages of funding through the [public-private partnerships].  We remain confident that we will be selected as AR1 is the lowest risk, lowest cost, fastest path to eliminating Russian dependence.”
Blue Origin declined to comment.
For its part, the Air Force wants to support development of a launch system that doesn’t rely on the  Russian-made RD-180 engines that power ULA’s workhorse rocket, the Atlas 5.
“The Air Force purchases launch services, we do not buy engines, we don’t buy rockets, we buy launch services,” Teague said. “So our focus has to be on certified launch service providers. That’s our target that ultimately we’re working towards. We anticipate being able to move forward with release of the [request for proposal] and completion of our strategy later this summer.”
The military’s investment in the engine development programs will “at the appropriate point” evolve towards the next stage of “launch services agreements in pursuit of a full launch service capability,” the general said.
David Hardy, the assistant deputy undersecretary of the Air Force for space, said the service is balancing its three main goals.
“Our interest is in ensuring that there is a robust trade space of launch services to meet national defense needs and we will make investments necessary to make sure that robust trade space is there,” he said. “We want to continue to promote that because we think that is very responsive to the triple mandate we have for competition, assured access, and ensuring that we’re not dependent upon the RD 180.”
Hardy added that “sometimes it does still take a rocket scientist. Building new launch systems is complicated.”
﻿
NOAA budget request prioritizes current satellite programs over future ones
Sierra Nevada Corporation passes key milestone in NASA commercial cargo contract