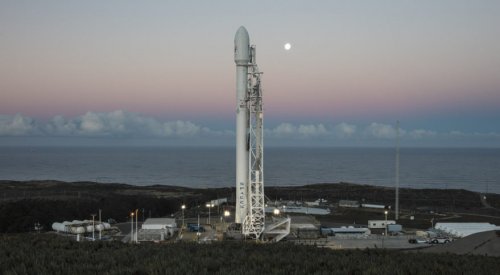 WASHINGTON — SpaceX moved the launch date for the second Iridium Next mission ahead by four days thanks to new range availability at Vandenberg Air Force Base, mobile satellite service provider Iridium announced today.
The launch, previously scheduled for June 29, is now slated for June 25 at 1:24:59 p.m. local time (4:24:59 p.m. EDT).
SpaceX is launching the entire Iridium Next constellation over the course of eight missions, seven with 10 satellites, and one split between five Iridium Next satellites and a NASA-Germany science spacecraft. This second mission has an “instantaneous launch window,” meaning it must occur precisely at the scheduled time.
“We’re excited for this next launch,” Iridium CEO Matt Desch said in a May 25 statement. “Satellites have already started to arrive at the launch site and are undergoing pre-launch preparations, so we’ll be ready to go. An earlier launch date is all the better for our constellation deployment plans.”
In February, SpaceX pushed back the second Iridium Next launch by two months, from April to June, citing its backlog of overdue missions exacerbated by last September’s loss of a Falcon 9 rocket during pre-launch testing. SpaceX returned to flight Jan. 14 carrying the first 10 Iridium Next satellites.
Prior to Falcon 9 explosion, Iridium had hoped to have the Iridium Next constellation in service by the end of 2017. The company’s goal is now mid-2018.
Iridium Next will comprise 75 satellites — 66 forming the core constellation with nine on standby as in-orbit spares. France-based Thales Alenia Space is building a total of 81 Iridium Next satellites, integrating them at Orbital ATK’s Arizona factory. Hosted payloads for flight-tracking startup Aireon and ship-tracking company exactEarth are also on Iridium Next.
Desch, in an April earnings call, said Iridium is keeping the healthiest of the first-generation satellites in a storage orbit below Iridium Next until the full second-generation constellation is complete. Following that, the entire first generation will be deorbited.
﻿
Inflight connectivity providers more concerned about cyber threats than laptop ban
Lockheed wins $46 million contract addition for missile warning satellites