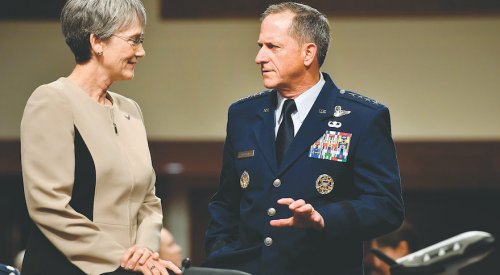 WASHINGTON — U.S. Air Force Secretary Heather Wilson said she approved the order Friday setting up a new deputy chief of staff for space operations position on the Air Staff of the Air Force, with a goal of making the office operational by Aug. 1.
It’s a move intended to help “integrate, normalize, and elevate space” within the service, Wilson said, speaking at a conference here hosted by Jacques & Associates’ FiscalTrak and the Air Force Association’s Mitchell Institute for Aerospace Studies.
The creation of the three-star position — known as the A-11 position on the Air Staff — was first announced in April at Space Foundation’s Space Symposium, but wasn’t made official until Friday. The three-star position will oversee space operations and requirements for warfighters, as well as serving as a space advocate at the Pentagon, according to the Air Force.
Wilson said there were “a few more steps to take” before she could name which Air Force general will fill the new post.
“We will be announcing within the next couple of weeks,” she said.
The Air Force is working through setting up various positions now, and will be looking for a number of expert civilians to serve in the office, Wilson said.
“We will also be advertising for a Senior Executive Service person as the principal deputy there, so probably someone with very deep rich experience in the space world as a civilian,” she said. “There will be a staff for the deputy chief of staff. By the first of August we’ll probably have about 10 key players in place and then build out from there.”
One of the top responsibilities for the new deputy chief of staff will be developing more space professionals and helping managing their careers, Wilson said.
“We’ve got a fantastic group of military officers with respect to space, not only [Gen. Jay Raymond, head of Air Force Space Command] and [Gen. John Hyten, U.S. Strategic Command leader], but when I was out in Colorado, you look around the table and up and down there’s some exceptionally great leadership in space and the Air Force,” she said. “So I think we’re well served there. We’ve got a lot of talent.”
But the secretary added she’s interested in developing talent not just in the Air Force, but across the entire military.
“One of the things I am a little concerned about, and [Air Force Chief of Staff Gen. David Goldfein] and I have talked about this, is we don’t have enough space professionals on the Joint Staff,” Wilson said, adding that it’s important to start “identifying people coming up, helping them develop their careers, so that we’re giving them the joint experience, and honestly [so that] the Joint Staff has people on it who understand space capabilities and vulnerabilities as a warfighter.”
A warning for industry
In addition to developing space personnel, the service is also looking to unify its command-and-control systems for satellites and other space assets. The Air Force is developing an “integrated command center” architecture that all systems need to be compatible with, leading Wilson to give a warning to industry.
“Honestly, if you’re going to propose a space system in the future and it doesn’t integrate into the integrated command center, which will be an open architecture, you’re not going to win the bid,” she said. “Period. Full stop.”
The era of one-of-a-kind operating systems needs to end, the secretary said.
“One of the things we’ve done with a lot of our space systems is run them like science experiments, because that’s kind of what they were,” Wilson said. “They were kind of one-offs or single constellations and they had unique ground control and they weren’t integrated as part of a system. In a very fast moving integrated environment, we need to be able to have integrated command and control, and not 12 or 13 independent systems with different people operating them. That’s not good enough.”
The Air Force needs “near-real-time understanding of what is in space, where it’s moving, and why,” Wilson said, and the first step is integration.
“We need integrated command and control so that like our other air forces, we can see what’s out there, we can control what we’re trying to do with that environment,” she said. “If you can’t control anything, if you can’t command anything, then you’re not really going to be able to prevail and be resilient in space.”
﻿
Lawmakers show little agreement on the defense budget
Amendment to Senate bill allows continued imports of Russian rocket engines