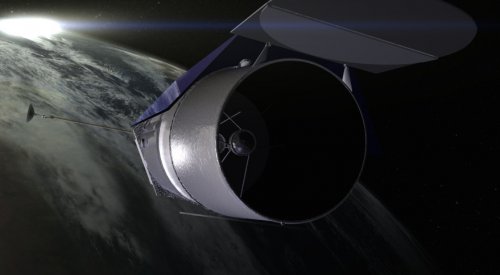 WASHINGTON — NASA announced June 22 the selection of an independent review committee that will examine cost and schedule issues with its next flagship astronomy mission, the Wide Field Infrared Survey Telescope (WFIRST).
NASA said earlier this year it would establish the review committee, a recommendation of a study last year by a National Academies panel examining the progress made on implementing the 2010 astrophysics decadal survey. That panel was concerned about growing cost estimates for WFIRST and its implications for other NASA astrophysics programs.
The committee is co-chaired by Peter Michelson, the chair of the physics department at Stanford University who has worked on high-energy astrophysics missions such as Fermi; and Orlando Figueroa, a retired NASA official whose career included serving as deputy director of the Goddard Space Flight Center and director of NASA’s Mars exploration program. The other members include a mix of scientists, engineers and program managers.
“We are confident this review will provide the insight and confidence among key stakeholders necessary to move toward what promises to be an exciting science investigation bound to reshape our understanding of the universe,” Thomas Zurbuchen, NASA associate administrator for science, said in a statement announcing the membership of the review panel.
WFIRST, the top-ranked large, or flagship, mission in the 2010 decadal, is still in its early phases of development. The mission was scheduled to enter Phase B in October, but agency officials previously said they would delay that until the completion of the independent review and implementation of any recommendations from that report.
“We have paused the progress towards the systems requirements review for WFIRST,” Paul Hertz, director of NASA’s astrophysics division, said in a presentation June 22 to the Astronomy and Astrophysics Advisory Committee. That independent review committee has already started its work, he said, including meetings with the project.
Hertz said he expected a final report from the panel in the fall. “Once we have a report in hand, then NASA will incorporate the report’s recommendations into our planning, possibly even impacting our design for WFIRST but certainly our plans for WFIRST,” he said. That will delay the project by several months, he added.
WFIRST, an infrared telescope that will use a 2.4-meter mirror assembly provided to NASA by the National Reconnaissance Office in 2012, is currently scheduled for launch in the mid-2020s. Hertz said that schedule will depend in large part on funding the mission receives.
“The earlier we can make money available, the faster they go and the earlier they launch,” he said. “Unfortunately, unless my budget goes up, we can’t accelerate WFIRST and maintain a balanced program at the same time, so we will not be accelerating WFIRST unless we get additional funds.”
Finding that balance is already a struggle for NASA’s astrophysics program. NASA requested $90 million for WFIRST in its fiscal year 2017 budget request, but the final appropriations bill passed by Congress in early May provides $105 million for the mission. Hubble and SOFIA also received slight increases, as did a mirror technology program not in the agency’s request.
However, the overall astrophysics program received $31 million less than the original request. Taking into account those increases specified for WFIRST and other programs, the rest of the astrophysics division is facing a cut of $47.4 million, or about 11 percent.
Hertz said NASA has submitted an operating plan to Congress that addresses those cuts, but since the plan has yet to be approved he could not discuss its details. Complicating matters, he said, is the fact there is now only a little more than three months left in the fiscal year to incorporate those changes.
“The places where we would like to accommodate this reduction we have slowed down our spending on, so that if Congress approves our operating plan, we can actually execute the operating plan we submitted,” he said. “If they tell us that it’s unacceptable to slow down on the things that we identified, and they tell us to slow down on something else, then it’s going to be challenging.”
﻿
SES: AMC-9 has “no risk of a collision with other active satellites”
ESA joins with satellite industry to harness 5G opportunities