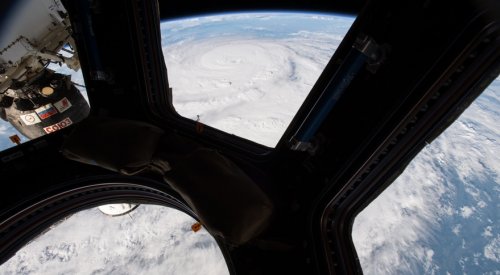 WASHINGTON — NASA’s Johnson Space Center will be closed through Aug. 28, and perhaps longer, as the city of Houston reels from unprecedented flooding caused by the former Hurricane Harvey.
The center announced Aug. 27 that it was closed to all but mission essential personnel and would remain closed through Aug. 28. “Senior management will evaluate on a day-to-day basis after Monday,” the center said in a statement.
There were no reports of flooding or other damage at JSC itself, but the surrounding area has been devastated by major flooding caused by record-breaking rains from Harvey, a storm that made landfall near Corpus Christi, Texas, Aug. 25 as a Category 4 hurricane and is now a tropical storm.
As of 6 p.m. Eastern Aug. 28, the Spaceflight Meteorology Group at JSC reported receiving more than 67.1 centimeters of rain at the center from Harvey. Other locations in the Houston area reported receiving similar or even larger amounts, causing extensive flash flooding.
The storm has not affected critical operations at JSC, such as operations of mission control for the International Space Station. “The Mission Control Center remains operational and fully capable of supporting the International Space Station from Houston,” the agency said in a statement on its website. “Accommodations are being made for critical staff to support mission control through the weekend.”
“Standing strong and keeping the lights on. Critical flight controllers camping out in the building,” Zebulon Scoville, a flight director, tweeted Aug. 27.
The storm has also not affected testing of NASA’s James Webb Space Telescope at the center. The telescope has been in an Apollo-era vacuum chamber at the center since mid-July for a 100-day test, cooled to cryogenic temperatures.
Weather forecasts are not promising for resuming normal operations in the coming days. Those forecasts call for continued heavy rains for the next several days throughout the Houston area, exacerbating already-serious flooding conditions.
Another space facility on the Texas coast was spared the brunt of Hurricane Harvey. SpaceX spokesman John Taylor said Aug. 28 there was “no impact” from the storm to launch facilities the company is building on the Gulf coast near Brownsville, Texas.
﻿
Ursa uses radar imagery to reveal extent of Texas flooding
NGA & NRO Leaderboard compares agency’s needs with industry capabilities