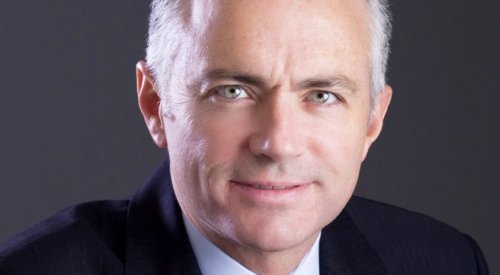 WASHINGTON — Satellite connectivity and content provider Global Eagle Entertainment says it has fully purchased the capacity of an inclined-orbit satellite from a prominent fixed satellite service provider.
Speaking in New York at the 19th Annual Needham Growth Conference, Global Eagle CEO Dave Davis told investors Jan. 4 that the company needed the capacity to support the growth of in-flight connectivity services, in particular for Southwest Airlines, its largest customer.
“Given the increased need for capacity in North America, we’ve actually done a deal with our largest supplier to purchase essentially an entire satellite,” said Davis.
Davis did not say the name of the fleet operator that owns the satellite, but Global Eagle has leased sizeable quantities of capacity from Intelsat and SES, and also counts Arabsat among its notable suppliers. Arabsat’s fleet does not cover North America, however, and Global Eagle’s capacity through the Saudi Arabia-based operator is likely through its acquisition of EMC, which has a Ka-band payload on Arabsat’s Badr-7 satellite.
Actual ownership of the satellite will stay with the unnamed fleet operator, but Global Eagle will have access to all of its capacity. Rather than leasing capacity for a set amount of time, Davis said the opportunity to purchase the capacity outright came with substantial cost savings.
“How do you decide to make a capital purchase versus continue to lease? We took a hard look at the satellite, had a third-party appraiser come in and give us an estimated useful life. If you even haircut that estimated useful life, you look at how much capacity is on the satellite, and then you look at how much we are paying for the satellite, our actual cost per megahertz is less than half of what we could get if we were leasing,” he explained.
Davis estimated Global Eagle has purchased rather than leased about nine transponders across four to five satellites. He pinned the decision to invest heavily in an entire spacecraft on the fact that its inclined orbit essentially brought capacity down to clearance prices.
Satellites are sometimes designed for orbits inclined away from the Earth’s equator to reach high or low altitude geographies, such as Russia. Another scenario is when a fixed satellite services provider shifts a satellite into an inclined orbit in order to save fuel, effectively extending its life, but with a tradeoff: stationary antennas can’t track with the satellite and will lose contact periodically.
For Global Eagle, Davis said this reduced performance doesn’t affect the company much because mobility services already call for antennas to track with objects in motion.
“When the antenna is moving anyway because it’s on top of an airplane, it doesn’t matter if that satellite’s got a tiny wobble to it,” he explained. “So there is opportunity to pick up capacity on these inclined orbit satellites at significant discounts, and that’s what we think we’ve done here.”
In a Dec. 1 filing with the U.S. Securities and Exchange Commission, Global Eagle said it was “in discussions with a leading satellite provider to purchase satellite transponders for an estimated price of approximately $50 million,” to support a large aviation-connectivity customer. That news was part of the company’s announcement that it was seeking new credit facilities.
Davis said Global Eagle has more leverage with satellite operators when procuring capacity now thanks to the acquisition of EMC, a maritime and remote connectivity provider, in a deal that closed in July. This, combined with a continued glut of capacity exerting downward pricing pressure on satellite operators, is helping the company buy bandwidth on the cheap.
“Our input costs are going down significantly. If you look at dollars per megahertz purchased in the fourth quarter of 2016, it’s 50 percent of what the dollars per megahertz cost us in the fourth quarter of 2014, so we’ve seen a 50 percent drop in per-megahertz pricing in a two year period,” he said.
Davis said he anticipates seeing price drops of that same order of magnitude in the future thanks to Global Eagle’s scaled buying power and the growing presence of high-throughput satellites. A countervailing trend he noted is customer awareness of the bandwidth glut, causing them to demand more bandwidth at lower prices.
Davis estimated Global Eagle’s aeronautical connectivity revenue will grow 20 percent over last year while maritime will see high single-digit or low double-digit growth. Global Eagle’s content revenue is expected to see high single-digit growth. Even with cascading costs in satellite capacity and evidence of greater supply on the horizon, Davis said Global Eagle sees little cannibalization of its content business by in-flight connectivity.
Most of the company’s content business, which involves providing stored entertainment such as music and movies on aircraft, is outside of the United States, where connected aircraft are less common. Contractual arrangements give aeronautical content providers rights to recently released movies before Netflix and other streaming services, he said, meaning there is still demand. Furthermore, Davis said most new widebody aircraft still have embedded seatback screens, and those aircraft are typically built to last 10 to 20 years.
﻿
Outgoing Obama administration highlights space achievements in series of exit memos
NASA asks scientists to start planning first JWST observations