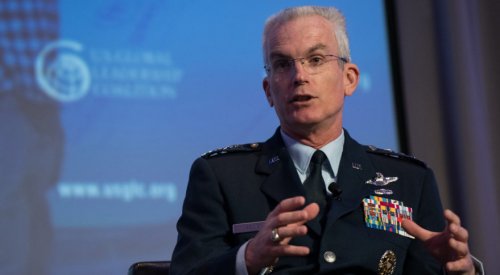 You’re reading the SN Military.Space newsletter we publish Tuesdays. If you would like to get our news and insights for military space professionals before everyone else, sign up here for your free subscription.
The next big thing in missile defense: sensors on satellites in lower orbits

The Pentagon’s panel of four-star generals known as the Joint Oversight Requirements Council will be briefed this fall on potential solutions to a major national security vulnerability: hypersonic weapons that fly into space at supersonic speeds and descend back down to Earth directly on top of targets. Current sensors could track some portions of the flight but more coverage is needed for the midcourse. 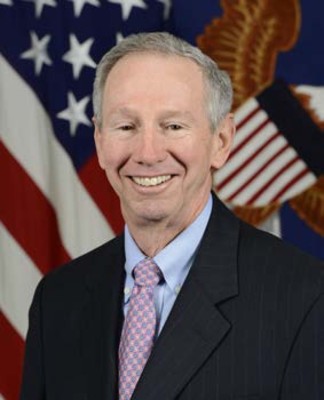 SENSE OF URGENCY China has been testing hypersonic glide vehicles successfully, and is advancing the technology at an alarming pace, warned Undersecretary of Defense for Research and Engineering Michael Griffin. The hypersonic threat brings a “new urgency” that the United States has not seen since the Cold War. A defensive shield would require global coverage and the cost of doing that with ground radars would be prohibitive so this has to be done in space, Griffin said.
“Our response has to be a proliferated space sensor layer, possibly based off commercial space developments.”

Undersecretary of Defense for Research and Engineering Michael Griffin
The U.S. Missile Defense Agency is reviewing proposed concepts for a space-based sensor layer from nine companies: Lockheed Martin, Raytheon, Northrop Grumman, General Atomics, Maxar, Draper Labs, Leidos, Millennium Space and Boeing. Industry sources said the studies will include options such as constellations in low and medium orbits.
THE NEXT STEP Air Force Gen. Paul Selva, who chairs the Joint Requirements Oversight Council, has asked MDA to come back with an “assessment of the sensor requirements.” What will the sensors have to be able to see? How large should the constellation of sensors be? How would sensors in space connect to command and control systems? 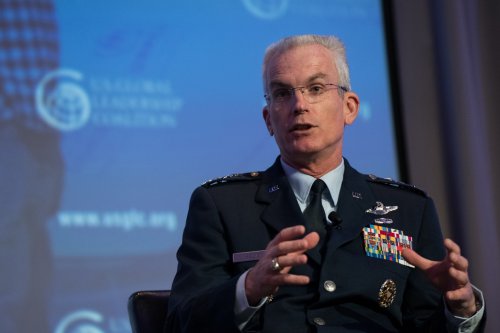 “Those are big hard requirements,” Selva told SpaceNews last week at a Mitchell Institute breakfast. “We asked for a systems engineering assessment for how they will link all that together.” The JROC expects to see a more concrete plan this fall.
During a roundtable with reporters last week, Griffin cautioned that the traditional approach to developing “exquisite” military satellites is not going to work. The Pentagon already has a network of early warning heat-detecting satellites in geostationary earth orbit that can see missile launches. The new layer of sensors will be aimed at low-flying hypersonic glide vehicles. What’s needed: “persistent, timely global, low-latency surveillance to track and provide fire control for hypersonic threats.”
If the solution is in space, Selva suggested, “Wouldn’t it be interesting if a commercial constellation of satellites actually had some capacity? If that’s true why would we build our own?”
SCARY SCENARIO How do you stop a bullet flying at least seven times the speed of sound and that can also maneuver? Selva asked. “If you think ballistic missile defense is easy …” A frightening prospect: a hypersonic weapon made by repurposing a ballistic missile booster. “What you have to do is depress the trajectory of the booster enough that you can make the object on its nose cone go faster than Mach 7,” Selva said. “How you achieve that? With extra energy, which means the object goes faster for a very long time.” A ballistic missile would fly on a predictable trajectory; hypersonic missiles don’t. “If you have developed a maneuvering object, it can maneuver at your pleasure,” he said.
‘END GAME REALLY HARD’ The MDA review will have to address this problem. “When you depress the trajectory of the booster you actually take it out of the view of many of the conventional sensors we have deployed today,” Selva said. An object traveling at hypervelocity speeds over the Hudson Bay, he said, can be aimed at anywhere in the continental United States. “It has that much energy and that much residual maneuver capacity. The end game defense is really hard.”
The key questions are how do you track the booster, the object, and figure out a way to kill it? Selva said. “That’s the task that MDA has right now.”
SPACE FORCE A POLITICAL FOOTBALL 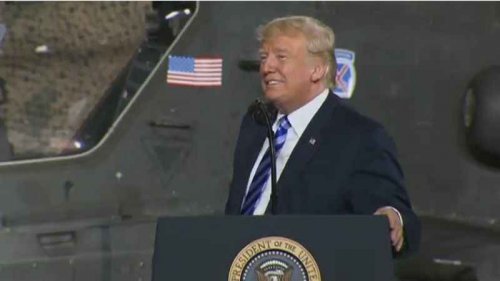 Once again President Donald Trump took the opportunity to remind military leaders on Monday that the Space Force is one of his top priorities. During an event at Fort Drum, New York, where he signed the John S. McCain National Defense Authorization Act for Fiscal Year 2019, Trump pointed out that Vice President Mike Pence just last week “outlined my administration’s plan to create a sixth branch of the United States military, called the United States Space Force”
Pence was in attendance, along with Deputy Defense Secretary Patrick Shanahan and Chairman of the Joint Chiefs of Staff Gen. Joseph Dunford. Trump turned to Dunford and said: “Got to get it, Joe. Got to get it, Joe. Right, Joe? Right?”
HOW WE GOT HERE According to an unnamed White House official who spoke with Axios, Trump in early 2018 became more fixated on space and floated the Space Force as an off-the-cuff idea. Staff didn’t take it seriously at first, and Defense Secretary James Mattis was not a fan, “but Trump kept insisting on it.” And he told Pence to get it done. 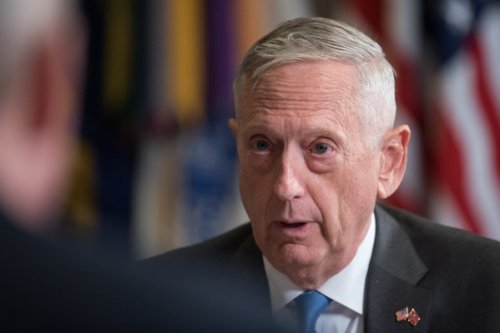 Mattis now insists he no longer opposes the creation of a new military branch. “I was not going against setting up a Space Force,” he told reporters traveling with him this week to Latin America. “What I was against was rushing to do that before we define those problems. We’ve had a year, over a year in defining.”
The House has taken the lead on Capitol Hill, with House Armed Services Strategic Forces Subcommittee Chairman Rep. Mike Rogers and the top Democrat, Rep. Jim Cooper, at the forefront.
Bill Ostrove, space industry analyst at Forecast International, said the issue of standing up a Space Force ultimately pits the White House and the House against the Pentagon bureaucracy and the Senate. With Mattis becoming more vocal in his support of the president’s idea, the rest of the Pentagon may have to fall in line. Very little has been said by the Air Force, which faces massive disruption, both in the near term — with the reorganization that Congress directed in the FY19 NDAA — and over the coming years as factions battle over funding and specifics of what a Space Force might look like.
One looming question from a legislative perspective is the timeline. Completing everything in time for the FY20 NDAA could be difficult in the current political environment. But this is much closer to becoming a reality than it was only a year ago.
DEMOCRATS NOT ON BOARD The ranking Democrat on the Senate Armed Services Committee Sen. Jack Reed said he would oppose any legislation to create a Space Force. “I think we have to reorganize our space forces because our threats are now in multiple dimensions. But I think creating a separate service with all of the infrastructure and the bureaucracy is not the way to go,” he said on Fox News Sunday. HASC top Democrat Rep. Adam Smith, who last year voted for a space corps, said he was appalled by the politicization of an important national security issue.
SMALLER, CHEAPER ELECTRIC SATELLITE ENGINES A FOIL TO CHINA’S SPACE WEAPONS
Among the orbital weapons that China is reportedly developing are “space stalkers” — satellites sent to space to trail targets. They may cause interference issues, or bump the target satellite to take it out of service.
In the face of such threats in space, the United States would respond with countermeasures and technologies to make U.S. spacecraft less vulnerable. That is where propulsion comes in. 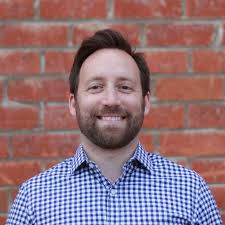 One of the concepts the Pentagon is studying is the deployment of large constellations of microsatellites to do the missions now conducted by a few very large satellites. How do you make that constellation more resilient to attacks? “You have to build in redundancy. But to achieve that you have to ensure close coordination of the small satellites. The way to do that is propulsion,” explains Simon Halpern, CEO of Phase Four, a startup based in El Segundo, California, and a former systems engineer at Ball Aerospace and Northrop Grumman.
“A spacecraft with no capability to do active maneuvering will not be as effective as one with some active maneuvering,” Halpern told me. “There’s a lack of understanding of how far along small-satellite propulsion systems have come. This isn’t PowerPoint. We have flight hardware.”
Phase Four developed an advanced plasma propulsion system for cubesats that can be scaled up for larger spacecraft. It uses radio frequency waves, rather than electrodes, to generate plasma. Halpern says he has received funding from NASA and from the Defense Advanced Research Projects Agency.
“If you want to fly 10 or 100 satellites in a given formation, you need affordable propulsion systems, reliable for military standards and mass produceable.”

Simon Halpern, CEO Phase Four
The military needs more proof this works, however. “We are starting the conversation,” says Halpern. The commercial market has a higher tolerance for risk for newer technologies. “We want to support the warfighter but we want to ensure the technology is thoroughly tested.”
NASA CHIEF WEIGHS IN ON SPACE FORCE: ‘OUR ASSETS IN ORBIT NEED TO BE PROTECTED’ 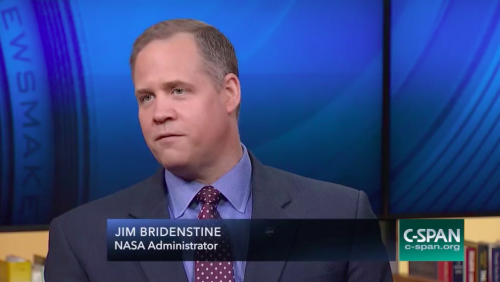 Jim Bridenstine, administrator of NASA and a former congressman, said he fully supports the proposal to create a Space Force. Although NASA is a civilian agency, it has “hundreds of billions of dollars worth of assets in orbit, plus we have our astronauts in orbit, and we are dependent on space being safe and accessible, and that’s important for the science we do, the discovery and exploration,” he said in an interview on C-SPAN Newsmakers with my SpaceNews colleague Caleb Henry. You can watch the video here.
Bridenstine noted that the full House last year passed a bill that would have created a Space Corps with 344 votes “which is a very big bipartisan vote.”
He said the security of space also is critical to the commercial industry and the broader civilian economy.
“At the end of the day, the technologies we are developing at NASA, we want to commercialize. The space economy represents $350 billion annually, The president has made a determination that it needs to be protected.”

Jim Bridenstine, NASA Administrator
The Air Force is now doing the national security space mission, but “there have been arguments made that we don’t want the space domain to compete with the air domain given how important it is to the American way of life. It’s because of how it’s becoming more contested every day.”
Also last week I talked with Wisconsin Public Radio about the Space Force debate. You can replay the interview here.
ON THE HORIZON 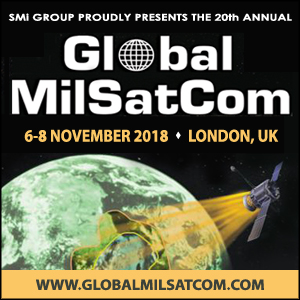